Ed Westwick: Sex On Legs and He Can Act Too!

Gossip Girl is one of my guilty pleasures.  Actually, who am I trying to kid?  I’m a shameless wench that will watch anything with good looking actors in it.  I’m about half way through season 2 and I’m racing to finish it by the time the new season starts again on 14 September.  Valerie over at TV News and Reviews has also fallen prey to this addictive little teen drama and as she said, the spoilers are going crazy for the new season so it really is prudent that I catch up soon!

As I know Valerie and other readers are not yet on season 2 of Gossip Girl, I am not going to spoil he storyline for you.  Suffice to say though that Chuck Bass (played by Ed Westwick) becomes a central character in the story and he gets a lot more screen time than he did in season 1. 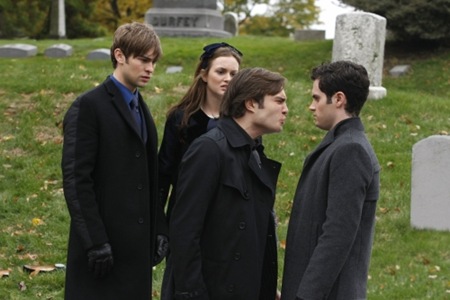 Nate, Blair, Chuck and Dan all getting along just fine

The biggest surprise of season 2 for me has been to see what an excellent actor Ed Westwick really is.  He has given strong performances the whole season and I have loved the storylines involving him.  It is in episode 13 “O Brother Where Bart Thou” that he really shines though and he gives a brilliant performance.

Watch out for Ed Westwick playing Heathcliff in 2010’s Wuthering Heights.  Damn, does this mean I’m going to have to read a real book by then?

As I near the end of season 2 I have to admit that Gossip Girl is indeed one of my favourite shows.  I love that I am able to recognise some of the locations after my trip to New York in June and I love that it is set in my favourite city on Earth.  I love trashy teen dramas and all the lies, back stabbing and love affairs that go with them.  Maybe I’ll never grow out of high school!