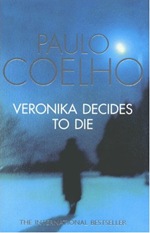 Veronika Decides to Die by Paulo Coelho is one of those books that has been on my “to-read” list for years; it was first recommended to me a good five years ago by my friend Vanessa over at sehnsucht.za.net.  That makes sense because it is one of those books that you just want to share with people and in the two weeks since I completed it, I have recommended it to at least two other people.
I must say the timing of me reading this book was quite peculiar as this is an incredibly troubling and stressful time in my life.  (Yes, I know you would never notice but I throw myself into blogging and television to make myself feel better!) I had stumbled upon a little book sale in the Galleria at Guy’s Hospital and all of Paolo Coelho’s books were on sale for £1 each.  I had to buy it; I simply had no choice in the matter!
The book begins with Veronika’s decision to die by overdose.  She has no particular reason for dying but then she has no particular reason for living either.  She survives the attempt and lands up in the dreaded Villete mental hospital in Ljubljana, Slovenia and falls under the care of the head psychiatrist, Dr. Igor.  Dr. Igor has a grand master plan to cure madness but is he just a quack?
Coelho weaves a wonderful story with mental illness at its heart.  Telling the story through the experiences of the patients in Villete, this is as much a commentary of the nature of madness as it is a wonderful and uplifting story.  To say that this book actually changed my life would be a great understatement but suffice to say that it reminded me of the necessity to live an authentic existence, of the intrinsic value of integrity and truth in our life.
I’m deliberately not delving deeper into the story as I would like readers to experience every surprise that I encountered but I wholeheartedly recommend this book to any adult.  I might be wrong but I have a feeling that it might not have as much of an impact on people still of school-going age.
This is a poetic and philosophical book and I give it five out of five stars.

Veronika Decides to Die has been made into a film starring Sarah Michelle Gellar and David Thewlis.  I can’t wait to see the film – Coelho said that Gellar "portraits with emotion the Veronika I always imagined".  I love David Thewlis (who played Remus Lupin in the Harry Potter Franchise) and I cannot wait to see the portrayal of Eduard (called Edward in the film).  Here’s the trailer for the film which I believe will be released in November:

I’d advise against reading the comments for the trailer as it contains massive spoilers for the book and the story.
SHARE:
Posted by Mandy Southgate at 10:46 pm