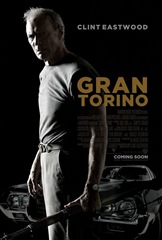 As a rule, I try to review all the films I see and books that I read. I really enjoy doing so – it’s a hobby for me and I see this blog as a kind of scrapbook where I can stick in all of my memories and look back over time at the brilliant stories I’ve encountered and the worlds I’ve visited.

Sometimes though, I’ll encounter a film or book that I just can’t review immediately and it is partially for the same reason that I review less of the television or music that I consume. It has to do with the greater depth at which I experience it and the impact that it has on me. Sometimes, words just won’t do it justice. Detractors of television often seem to imply that it is a lesser art but they’ve obviously not been exposed to some of the most powerful and moving moments in television history.

Gran Torino was just such a film for me. It is a really fantastic film with a strong cast and well-written script. Clint Eastwood gives a powerful performance and greatly deserves the various award nominations that he received. I first watched Gran Torino back in April and I let it brew in my mind for a couple of months until I watched it again on the plane on the way back from New York.

Gran Torino deals with themes of racism, intercultural relations and the scourge of gangs and its impact on youth culture. Eastwood plays Walt Kowalski, a Korean War veteran who finds that his neighbourhood has become increasingly populated by Hmong people from Vietnam. In his first interactions with his neighbours, he stereotypes them and lumps them into the “gook” category and he is hostile and antagonistic towards them. The onscreen relationship develops subtly and masterfully though and at no stage does it feel forced or contrived. What emerges is an incredible relationship and a strong bond that changes all of the characters’ lives forever.

Gran Torino has been doing really well on the DVD charts lately and has topped the charts for several weeks.

This is another film that I happily give five stars for!  We’re having a good year.