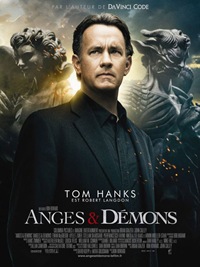 Quite a while ago, we went to watch Angel and Demons. This film is based on Dan Brown's novel of the same name which actually came before The Da Vinci Code.
I'm sorry to say that the film was an absolute non-event in my life and absolutely forgettable. I have always half believed in the conspiracy theories surrounding the Illuminati. Well, that is not really accurate. In the same way as paranormal phenomenon and extra-terrestrial life on earth, I have enjoyed thinking about it, wondering if it is true and drinking in the mass of media on the subject. It is escapist on the one hand and on the other, there is the thrill of thinking that one day it could be proven to be true.
I expected Angel and Demons to stimulate my imagination and to make me come out of the theatre wanting to devour the books and the previous film. I expected to rush straight home to my computer and spend the evening Googling stories about the Illuminati and the Catholic Church. At the very least, I wanted to fall a bit more in love with Ewan McGregor.
But nothing happened. We came out of the theatre and forgot about the movie. And that is just about the worst thing you can say about a film, isn't it? It is a well known fact that I have wanted to visit Italy for almost as long as I wanted to visit New York and I didn't even find the cinematography in the film inspiring. And the big bad weapon was a load of crap.
On account of the fact that I couldn't find an image to represent zero out of five stars, I give the film half a star.