Film Review: Night at the Museum: Battle of the Smithsonian (2009) 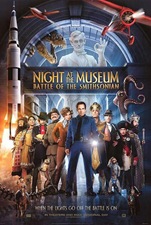 We went to see Night at the Museum: Battle of the Smithsonian on Saturday. Considering the grilling I gave Pink Panther 2, Stephen was massively surprised that I agreed to see this film but I have to say, I quite enjoyed it! The general consensus out there seems to be that people have been pleasantly surprised with the film.

As a rule, comedy is not my genre of choice but I laughed a lot during this film and I really enjoyed myself. I was impressed with the costumes and effects and while it didn’t have the strongest plot, it was a fun film. 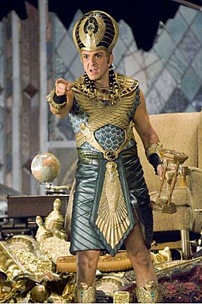 I loved Hank Azaria as Kahmunrah. I’ve been a fan of Hank’s for a while (and was gutted when Huff was cancelled) and he was just great in this film.

Amy Adams (Giselle from Enchanted) was surreal as Amelia Earhart and Owen Wilson was brilliant as a thumb-sized Jedediah Smith.

So the verdict is this: it is not exactly a film of Oscar winning performances or script but it was fun and entertaining and visually appealing. It is a film I would recommend seeing at the cinema because of the visual effects and costumes.

While the critics slated the film on Rotten Tomatoes, the RT community gave it 65% and I concur. I give it 3 out of 5 stars.