Well, it's official. Abhorsen by Garth Nix is The Best Book I Have Ever Read In My Life©.

Abhorsen is the final book in the Old Kingdom trilogy which is a fantasy series set in the imaginary realms of Ancelstierre and the Old Kingdom. The Old Kingdom is full of magic and the lines between life and death are constantly blurred and manipulated. As magic interferes with electricity and modern machines, there is no “modern” technology in the Old Kingdom and this is contrasted with the modernity of Ancelstierre. Ancelstierre is very similar to the England of the World War I era, with its planes, telegraphs, electrical lights and telephones. The two realms are separated by a wall and such is the magic of the Old Kingdom that the two sides of the wall experience different seasons and even different times of day.

It is within this setting that the epic battles against evil and the dead occur and the events in the book date back over about 20 years with references dating back to the dawn of time.

The Old Kingdom series has it all. Believable, likeable characters; excellent writing; page-turning, heart-stopping, breathtaking battles; magic, fantasy and superb imagination and the most amazing cat and dog you will ever read about.

I thoroughly enjoyed Philip Pullman’s His Dark Materials series and JK Rowling’s Harry Potter series but I felt slightly unfulfilled with the way in which those series ended. In contrast, I was positively in raptures as I raced towards the end of Abhorsen and the experience was as thrilling as a big budget action film.

The best thing about finishing the book is that it doesn’t all end there! Garth Nix released another book containing a novella and short stories about the Old Kingdom called Across the Wall: A Tale of the Abhorsen and Other Stories and I am just glad that I don’t have tear myself away from this series just yet. I’ll be sure to review the book in the next couple of weeks.

I have one final thing to say, for now with respect to the Old Kingdom series. 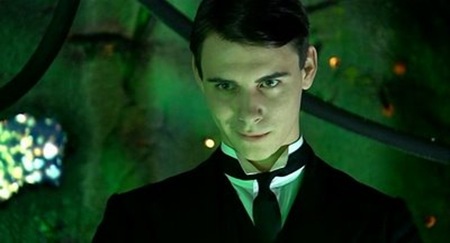 (Garth Nix has famously declined offers to make films of his books, a decision I greatly respect. I absolutely agree with his position that he would rather have no film at all than a bad film. But, if a film were to be made, then I would absolutely love to see Harry Lloyd in the role of Nicholas Sayre).