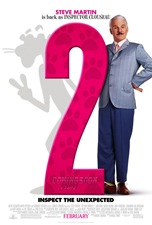 I'm actually struggling to formulate proper sentences in compiling this review for Pink Panther 2. What I want to say is "boring, unoriginal, unfunny, predictable, stupid" and leave it at that.

For once, I completely agree with the critics at Rotten Tomatoes because like them, I also give it a 1 out of 10.

The main reason I give it one star is to rate it at all. Any less and your vote doesn't count, if you know what I mean. I'd just join the hordes of people who were stunned into silence by this ridiculous, terrible film.

It might appeal to some though - Stephen giggled throughout the entire show and seemed to enjoy it. He knew I wasn't too keen on seeing it in the first place, so he was quite concerned at times when I held my head in my hands and appeared to cry in pain. Nevertheless, I wouldn't recommend it to anyone.

It is even worse than Twilight.