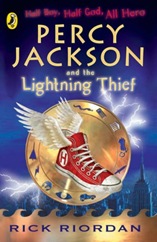 I've taken a couple of chances in previous months when it comes to young adult or children's literature. I'm not exactly the target age group but the magic of books like JK Rowling's Harry Potter series is that they captivated the imagination and attention of people young and old.

Inventive, original and skilful authors like Rowling, Nix and Horowitz have woven such fantastical stories that I've found myself transported to other worlds and unable to put their novels down.

Unfortunately, this book is not one of those masterpieces. I simply didn't enjoy it all that much and I found it hard to care about the characters. This was compounded by the fact that there was little to no character development in the book. It is the story of a boy who discovers that his father is Poseidon, god of the sea and he embarks on a quest to prevent a catastrophic war between the gods. Too many of the scenes seemed to be executed in a hurried manner and Riordan just tried to fit too many clever facts into the story. I found Riordan's storytelling to be lacklustre and the whole book reminded me of the watered down colours of old 1970's cop shows. The world of young adult storytelling is a much more vibrant, colourful place these days and Riordan has no time to sit on his laurels and fancy himself a clever storyteller.

The "Percy Jackson" franchise has been called a "Harry Potter" clone but it really isn't. It is children's or young adult fiction with a fantasy or supernatural theme but any further comparisons are pretty contrived (albeit funny - check the reviews on Goodreads).

I'll give this book a three out of five but I do think that perhaps the series could get better in later installations. I might give the second book a chance to see if Riordan settled in a more pleasing style. I'll be sure to keep you posted.