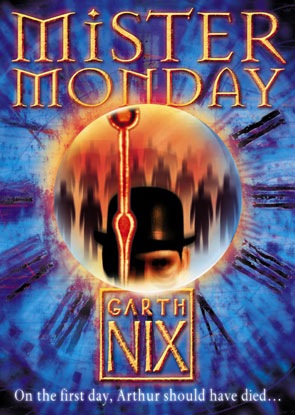 I'm forever going on about the Awesomeness© that is Garth Nix but then again, he is such a prolific author that you could read his books non-stop for months and never visit the same world twice in all of that time. Recently, I've actively stopped myself from reading his books for a short while, otherwise the only reviews that would ever appear on here would be Garth Nix reviews!

Many authors will complete one series before moving on to another (for example, J K Rowling and the Harry Potter series) or they may carry two similar series of books simultaneously (for example Anthony Horowitz and the 14-year old, mainly male protagonists in his Power of Five and Alex Rider series). However, the worlds and stories in Nix's three series (as well as his stand alone books) are so unique and so absolutely different from each other that it is possible to read them one after the other (as I have been doing) without getting bored.

So far, I've read two books from Nix's Old Kingdom series, one from his Seventh Tower series and his stand alone book, Shade's Children. Mister Monday is from his Keys to the Kingdom series. To give you an idea of how he writes, he has finished the Seventh Tower series and the last Keys to the Kingdom book is to be released this year with the next Old Kingdom book releasing in 2010. His stand alone book A Confusion of Princes is releasing this year too.

Well, after that rather long introduction, what did I think of Mister Monday? Initially, I was worried that this book would be a bit too young for me and I sought the advice of many of my friends before reading it. The lovely Windrider convinced me to read it in the end though.

The book was not too young for me and in fact, it is a remarkably complex and detailed story. There are so many levels on which this book is just brilliant. Nix has created another wonderful and surreal universe, intricately detailed with the rules, customs and hierarchies of the occupants. This is an author who never disappoints his readers in that respect.

This is a well written book with excellent play on words and the concepts of time and space. There are fantastic villains, my favourite being the dashingly handsome Monday's Noon and unlikely heroes too.

Apart from Shade's Children, this is the first Nix book I have read that has been remotely set in modern times in our world (although like Shade's Children, it is set somewhat in the future following a devastating modern-day flu epidemic). I love it when fantasy books are based in our world and I am eager to read the other books in the series.

Finally, I just wanted to mention how the dog faces and bowlers hats in this story reminded me of the most surreal book I have ever read by author Jeff Noon, Vurt. I think it is definitely time to reread Noon's books and see how I respond to them 15 years down the line.