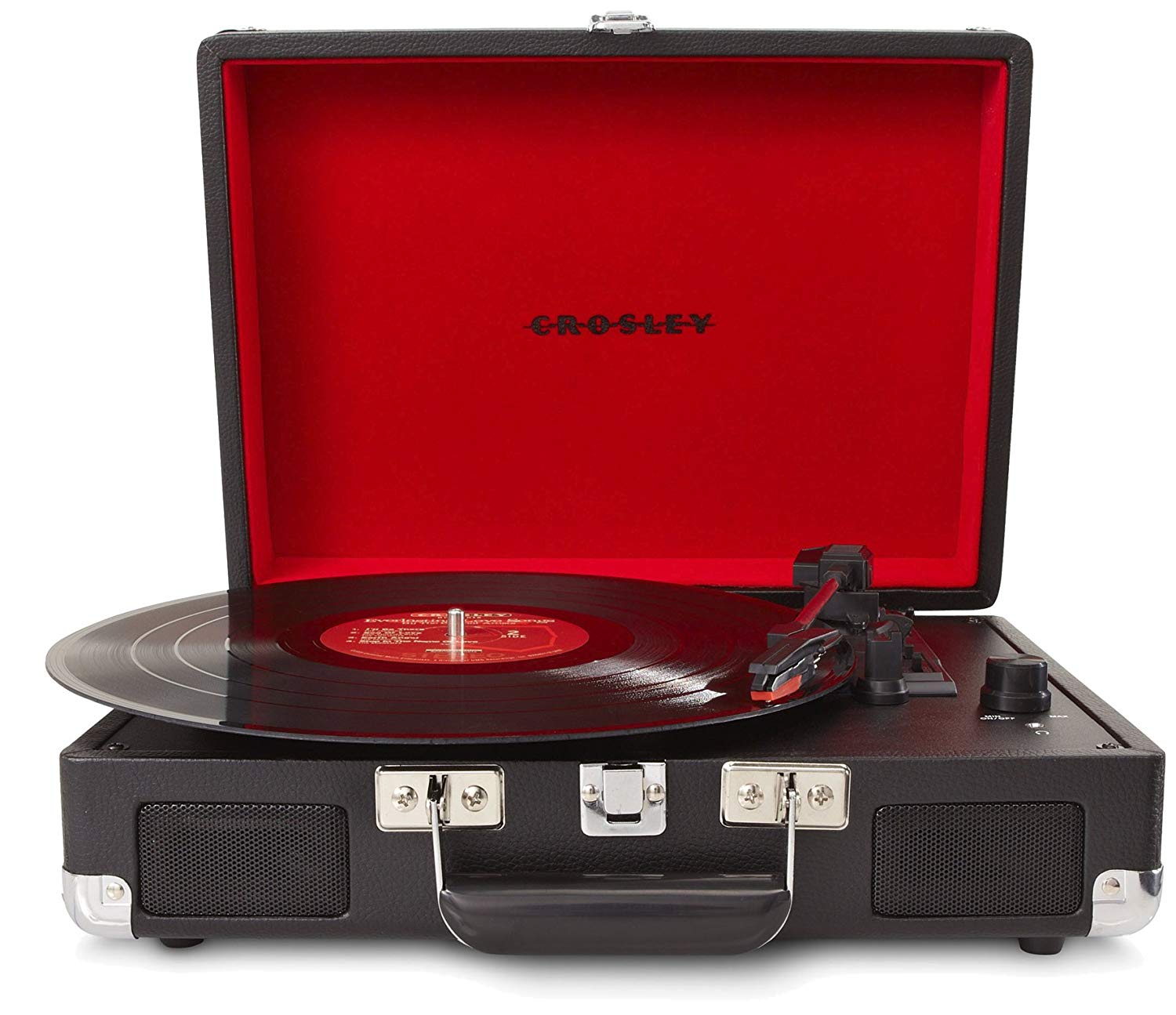 There are two things that happened since we bought our own home: one, after twenty years of travelling around the world in a sealed box, I finally unpacked my record collection and two, my favourite husband bought me a Crosley vinyl turntable. It's a far cry from the Sony multi-component sound system that we had in the 80s but let's be honest, if I hadn't unpacked my records in 20 years, I couldn't exactly justify replacing my sound system.

I was absolutely thrilled to receive the Crosley turntable for my birthday. I wasn't expecting it at all and it is amongst the most thoughtful gifts my husband has bought me. I'm notoriously hard to buy gifts for - I hate trinkets and 'things' - but he usually wins me over through my love of music.

The Crosley turntable is lovely. It is a tiny briefcase style turntable that barely takes up more room that the LP itself. It was so simple to set up that even I figured it out - just unpack, plug in and play.

It has three speeds - 33, 45 and 78. How I wish I had my grandmother's collection of 78s and how I wish that an entire box of 45s hadn't been lost over the years. Still, I have over 300 33s, dating from the 60s to the late 80s, so that should keep me busy. No, I'm not old enough to have a record collection like that; I have all my father's records which he left behind when he left South Africa.

The turntable comes with built-in speakers and they're okay, somewhat lacking in both treble and bass. I still have a Samsung CD player, amp and speakers so am hooking that up to get a better sound.

The Crossley turntable also comes with a couple of nifty features which were available on later turntables but were definitely not on my parent's Sony turntable which was bought in the early 80s. Firstly, it has auto stop which you can switch on or off. I switched it on, thus saving myself the heartache of yet another ruined needle on a forgotten record or that endless scratching at the end of the side.

The turntable also has a tone arm control which allows you to softly lower the tone arm onto the vinyl without dropping it or scratching the record.

There is a 45 RPM adapter which makes my heart ache for my lost 45s and a headphone jack for quiet listening. I'd rather make my neighbour's floor shake which is why I'm opting to wire the Crosley up rather than go that route.

Finally, the turntable comes with a hold down clip for the tone arm which means that it can be stored upright when not in use which is very useful!

For convenience and connecting me with my much-neglected record collection, I give Crosley Cruiser vinyl turntable an excellent four out of five stars, deducting just one star for the slightly tinny speakers.

If you're convinced and would like to buy a Crosley Cruiser Deluxe Briefcase Style Three Speed Portable Bluetooth Vinyl Turntable with Built-In Stereo Speakers, you can click the widget below. I'll earn a small amount of commission which will go towards the running of this site.