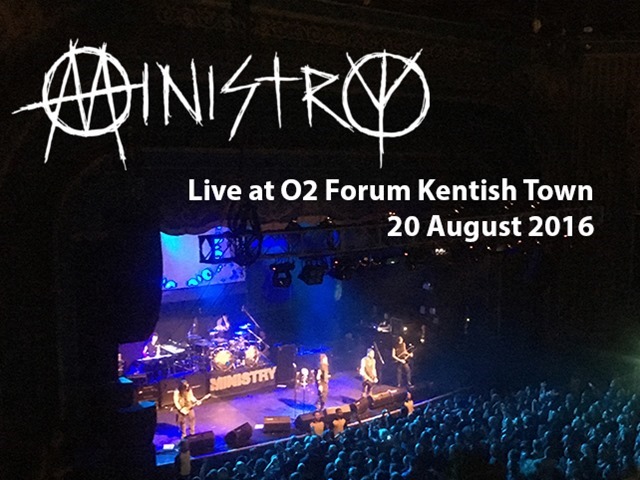 I can't remember the first time I heard Ministry. I do known that they were the soundtrack for the summer of 1992, an absolutely crazy three months when most of my friends were on vacation and I hung out with a very irresponsible group of people whose names I can't even remember anymore. The minute my friends returned to town, I dropped that crowd like hot cakes but I maintained my love for Ministry.

Fast forward 24 years (how is that even possible?): it's the summer of 2016 and Ministry are in town for the latest leg of their From Beer to Eterna tour. This time my friends are around (quite a mean feat seeing that we all live 5,000 miles away from where we were in the summer of 1992) and we decided that this was a fantastic opportunity to dig out our old coffin kid wardrobes and head on out.

We arrived at the Forum during Devildriver’s set, who were support band for Ministry. I had not heard their music before but what I heard was good enough that I was convinced to give them a listen in future.

Ministry finally burst onto stage with a series of tracks from Rio Grande Blood (2006) and From Beer to Eternity (2013). I'm not familiar with either album but such is the presence of Al Jourgensen and band that I was barely out of the doors after the concert when I'd bought both albums.

The band then launched into a roof-blowing session with "N.W.O" and "Just One Fix". It was a poignant moment. I remember thinking back in 1992 that there really was a new world order, that the end of the Cold War meant an ushering in of a golden age of technology and progress. The Nouveau Belle Époque if you will. And then Bosnia and Rwanda happened and that was just the beginning of a landslide of decline.

The band continued their set with more of their older material with barnstorming performances of “The Missing”, “Deity” and “Stigmata” from their 1988 album The Land of Rape and Honey before finishing up with one of my very favourite tracks “Thieves” off The Mind Is a Terrible Thing to Taste.

And then they were gone. Except that I’d cheated and looked at previous setlists and knew that they were coming back for two encore. Sure enough, in no time at all, they were back on stage with perhaps their most popular track of all time, “Psalm 69” followed by “So “What”. They finished their first encore off with “Khyber Pass” off Rio Grande Blood, a fantastic track which furthered my decision to get the rest of their discography after the concert.

As is customary, Ministry arrived on stage for one last track, their rendition of Devo’s “Gate of Steel”, bringing down the roof of the Forum and ensuring that the fans left with a huge smile on their faces.

I loved every minute of the Ministry concert and it has made me determined to go to more live concerts. I’m definitely keen to see more industrial or metal bands live. 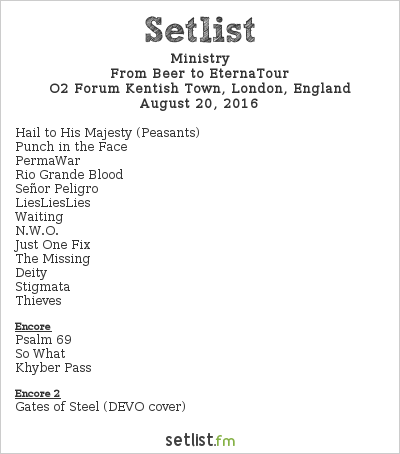 Edit this setlist | More Ministry setlists
SHARE:
Posted by Mandy Southgate at 11:01 am