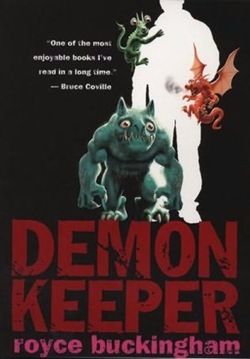 Nathaniel Grimlock is a demon keeper, taken in as a young boy to become an apprentice to master Demon Keeper Dhaliwahl.  Now Dhaliwahl is gone, and Nat has been left behind to look after a household of demons and to keep the demon world in order.  The only problem is that Nat’s only non-demon companion is a sheep dog called Bel and Nat has to admit that he is lonely.  What could possibly be the harm in meeting other young people his age, in perhaps getting a girlfriend?

What could be the harm, indeed?  In Royce Buckingham’s Demonkeeper, demons are all around us.  They are the manifestations of chaos in our universe and can range from the playful and mischievous to the outright malevolent.  When Nat ventures out and meets junior librarian’s assistant Sandy, he also catches the attention of two neighbourhood boys who break into the house and release The Beast, one of the nastiest demons of all.  Can Nat restore order and keep the girl, and most importantly, can he do it before the Thin Man catches up with him?

Demonkeeper is a short novel aimed at children aged 10 and up.  It is laugh-out-loud funny in places and my favourite part of the book was when Nat accidentally microwaved one of his demon minions (it exploded but don’t worry, the demon survived).

Nat is a fabulous character with a dry wit and self-deprecating sense of humour.  Most of all, he is a strong character with an enormous responsibility on his shoulders who grows from reluctant and clumsy to heroic and competent.  I liked the idea of his three demon minions as well as the Thin Man’s minions.

Most of all, Demonkeeper is a cautionary tale and I really enjoyed The Beast’s raison d’etre and the notion of lost children and the adults they become.

Demonkeeper is the perfect book for reluctant readers and should appeal to both boys and girls.  It is fun, exciting and original and I am pleased to see that it is the first in a trilogy.

I give Demonkeeper four out of five stars and will certainly continue to read this trilogy.