It’s been hours since I watched “Making History” yet still I cannot stop thinking about it. The penultimate episode in the fourth season of BBC Being Human, “Making History” is terrifying and horrific. It was the kind of television that has the viewer hiding behind the sofa or, if you’re mature like me, barely peeking out at the television from behind the safety of a cushion.

There was a moment, towards the end, when I was so appalled that it must have been written all over my face. My other half walked in and asked if I was okay and it was all I could do to gasp out a pained, “no!” It was certainly difficult to speak or breathe; I believe I might have held my breath for the last 15 minutes of the episode. Even now I cannot draw enough air into my lungs as I think back on the episode.

“The History Maker” follows five deeply intertwined storylines and it won’t be possible to discuss any of it without giving away massive spoilers, especially for events that take place 30 years into the future. So here it is: 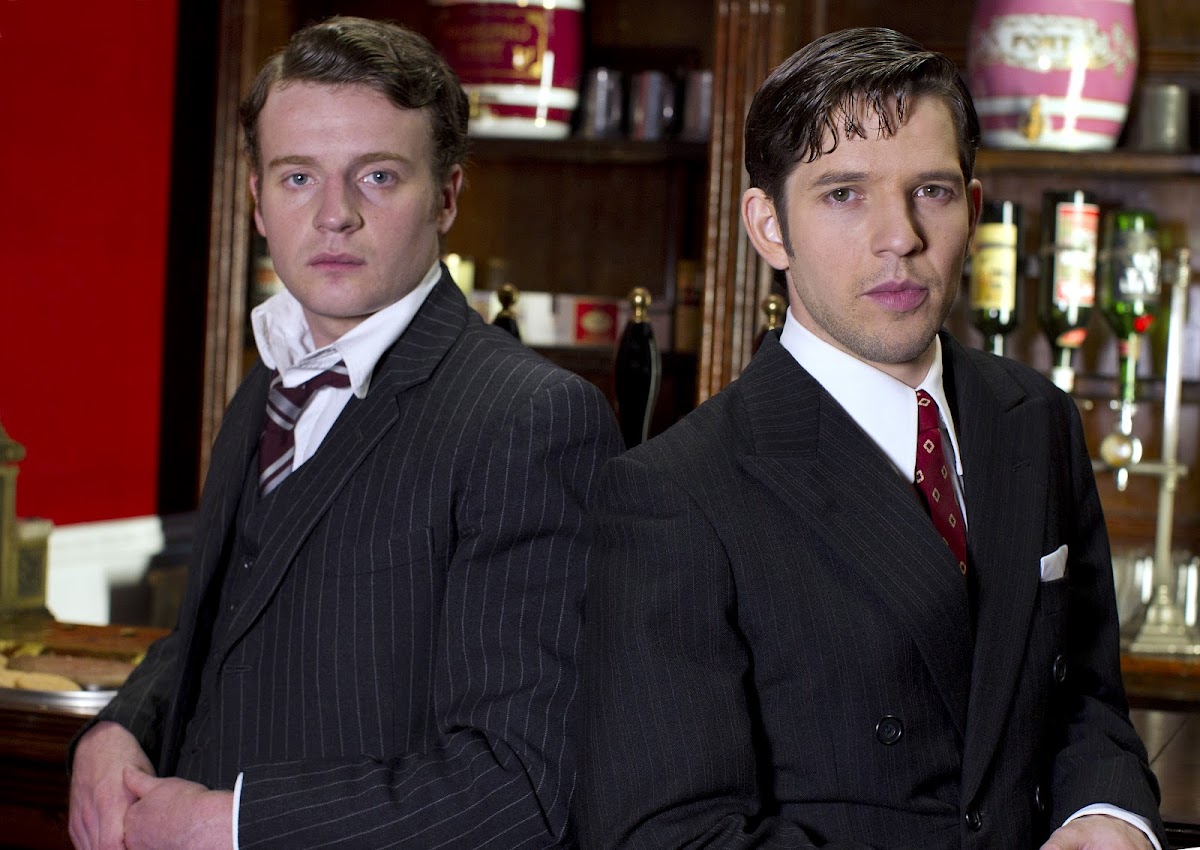 1950. Nick Cutler (Andrew Gower) is an ambitious young solicitor but even he can't get the slimy, corrupt mobster Hal Yorke out of the mess he finds himself in. Unless it is just a matter of motivation? Well, Hal (Damien Molony) turns Cutler into a vampire just in case and suddenly he is motivated enough and Hal is released from prison. Result. Well, for Hal at least because things are about to take a very bad turn for Nick Cutler.

Bugsy Halone: "All We require is everything"

Indeed, Hal requires everything, especially Cutler's mercy and his last vestige of humanity. And if Cutler can't do it and cut all ties to his former life, foregoing mercy for a crystal glass of blood, then Hal will do it for him. Wow, I wonder if that decision will ever come back to haunt Hal? May I just say that scary Hal is also pretty awesome? In a terrible sense, of course. 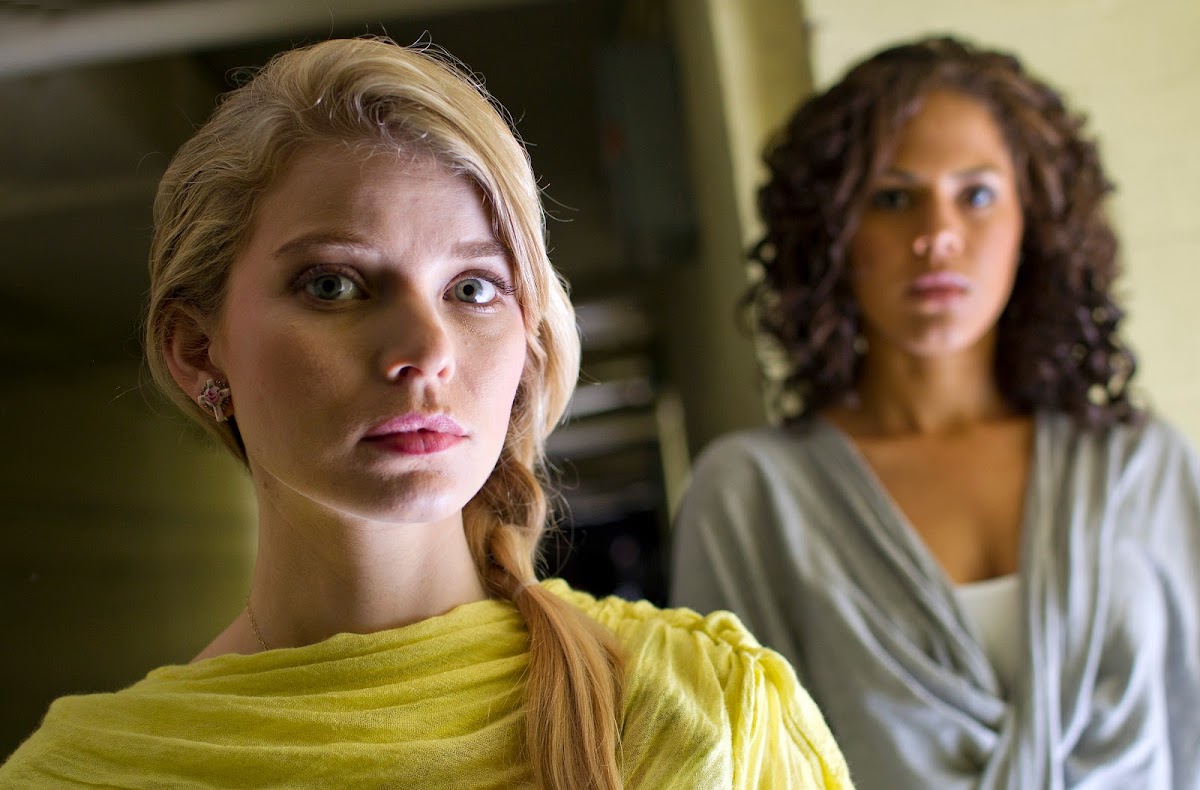 Oh Annie, didn’t your parents ever tell you never to trust strangers? Especially creepy Future Girl strangers claiming to be your infant daughter?  Well, it is true.  The Woman is in fact the ghost of Eve (or so she says), and she has travelled back in time following her death in 2037.  What disturbs me is that nothing good has ever come of Annie (Lenora Crichlow) entering the Other Side and she ought to be far more careful than that!

The Woman (Gina Bramhill) takes Annie to the future and gives her a blow-by-blow account of the evil that transpires when the vampires take over the world (which is about to happen in a couple of days).  Mass murder, internment camps, worldwide domination and Hal as pure evil.

Internment camp sign: “Through me you pass into eternal pain”

She tells Annie of the fall of Tom and his devastation following an attack on humans.

It seems like a throwaway remark.  Surely the Tom (Michael Socha) we know would never hurt humans, would never put himself in that position?  For much of the episode it certainly seems that way.  Cutler tries to convince Tom that he needs to kill the Old Ones, that vampires are the embodiment of evil. 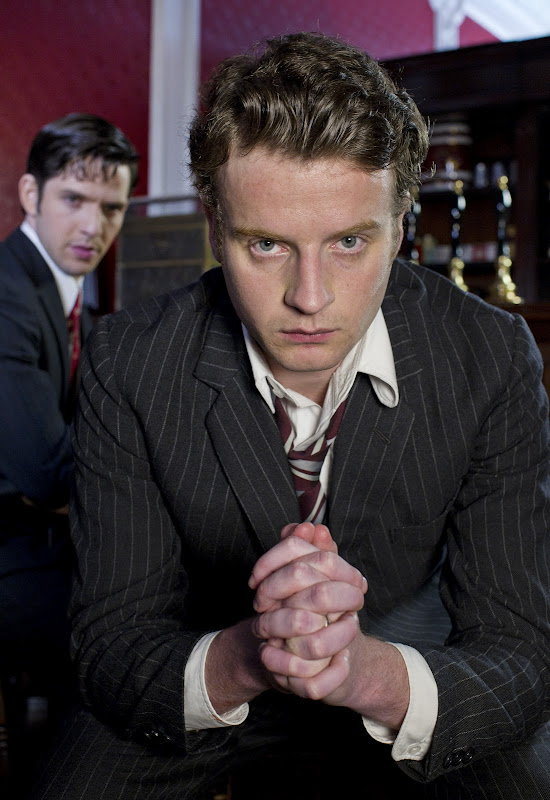 But Tom refuses to believe it.  He dons a sorbet orange dress shirt (ultimately paired with a stylish, blood red tie) and explains his case to Cutler.  He wants to negotiate with the Old Ones; after all, Cutler is good and Hal is his friend, right?

I wonder what Cutler could do to convince him otherwise?

Well, this is “Making History” of course and Cutler decides to make a little bit of history himself.  Hal made history when he forced Cutler’s hand and the events in 2037 (or even days from now) have already occurred.  So Cutler draws Hal in and appeals to his greatest weakness: blood.  Hal, when he’s off the wagon, is a very scary vampire indeed.  Despite his best efforts to fight it, he descends first into madness before going into withdrawal and finally gives in and returns for more.

Cutler has Hal right where he wants him, almost.  Tom no longer trusts him as Hal becomes a slave to blood once again.  Fifty-five years he was clean, fifty-five years of walking a fine line between obsession and madness.  Cutler suspects that Hal might have a slight affliction of mercy and decides to remedy him of it.

I warned you there were spoilers in this post, right?  No really: there are huge, massive, spoilery spoilers! Stop reading if you’ve not seen the episode because it got pretty hectic there for a while and I need to talk about it. 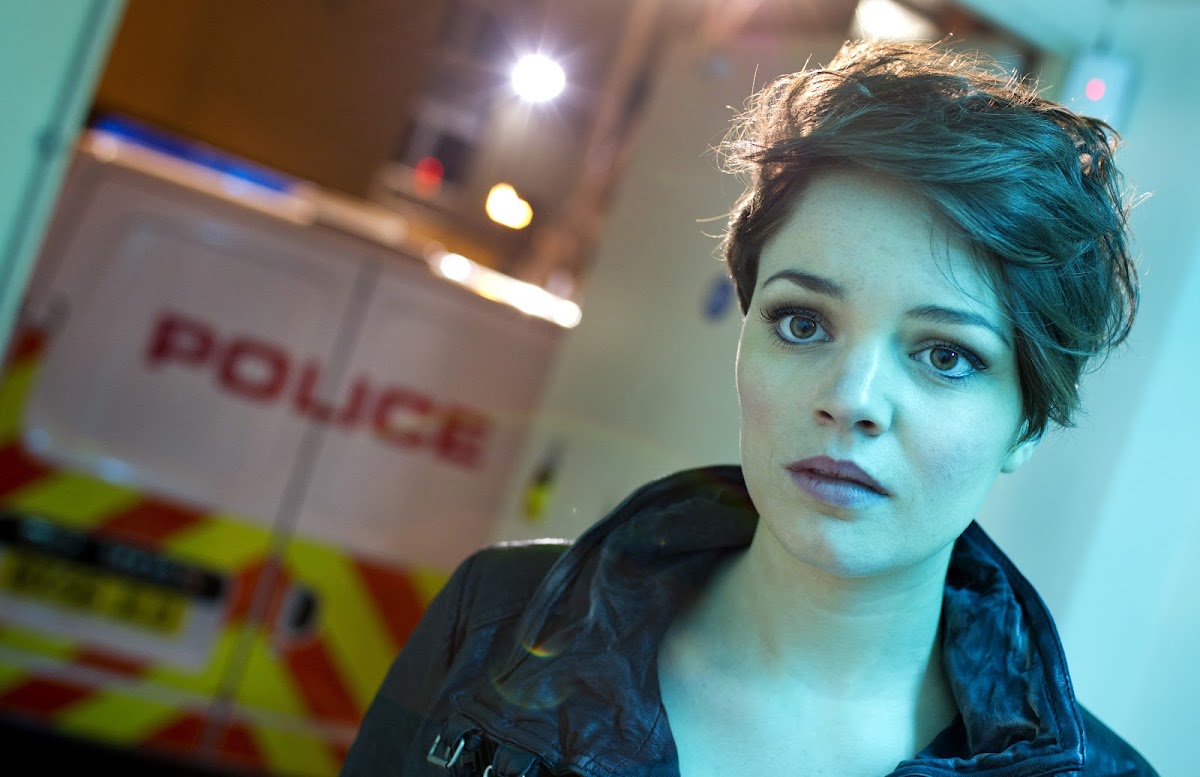 It is no secret that I don’t like Alex.  I mean, sure, Kate Bracken is a fantastic actress with an accent to die for and Alex is a really interesting character with quick wit, intelligence and overall likeability but I’m not too keen on Hal having any love interests at all.  And yes, that has nothing to do with Hal’s diabolical flirting skills and everything to do with jealousy.

Moving on swiftly.  As soon as I realised what Hal had done to Cutler’s wife (and I figured it out pretty early in the episode), I knew that he was going to hurt Alex.  I just didn’t expect it to be quite as gruesome or graphic as it was and it really was horrible.

Of course, Cutler expects Hal to forsake his humanity as he forsook his own in 1950 but Hal is not quite there yet.  In the midst of all the horror, there was some truly spectacular acting from Andrew Gower when Hal realises what Cutler has planned and pleads with him:

Hal: “Don’t do this. Please”.
Cutler (disbelieving): “Sorry, what?”
Hal (kneeling): “I’ll do anything. Just stop this”.
Cutler (incredulous): “What’re you doing? [Laughs]. Oh God. Are you begging?  Now you stop, seriously, it’s horrid”.
Hal: “Please. Cutler. Nick”.
Cutler (nervous laughter): “Now he’s calling me Nick [really freaking horrible giggle]. You can’t do this, you… You’re Hal Yorke!  I’m gonna heave”.
Hal: “Remember what you were”.
Cutler (grabs Hal by his shirt): “What I was? Now you stole that from me!  Now you dragged me into this world! You killed my wife, you turned me into a murderer, an addict.  You made me abandon my whole species!”

And then, when Cutler refuses Hal’s apology, telling him he does not get to say he is sorry, Hal’s humanity shines through once and for all and we realise that he is not going back.  He will not become the vampire that takes humanity down in the future (or so we hope).  It is beyond moving.

Hal: “I can’t let this happen, Cutler. I will kill you if I have to but I will not let you take their world”. 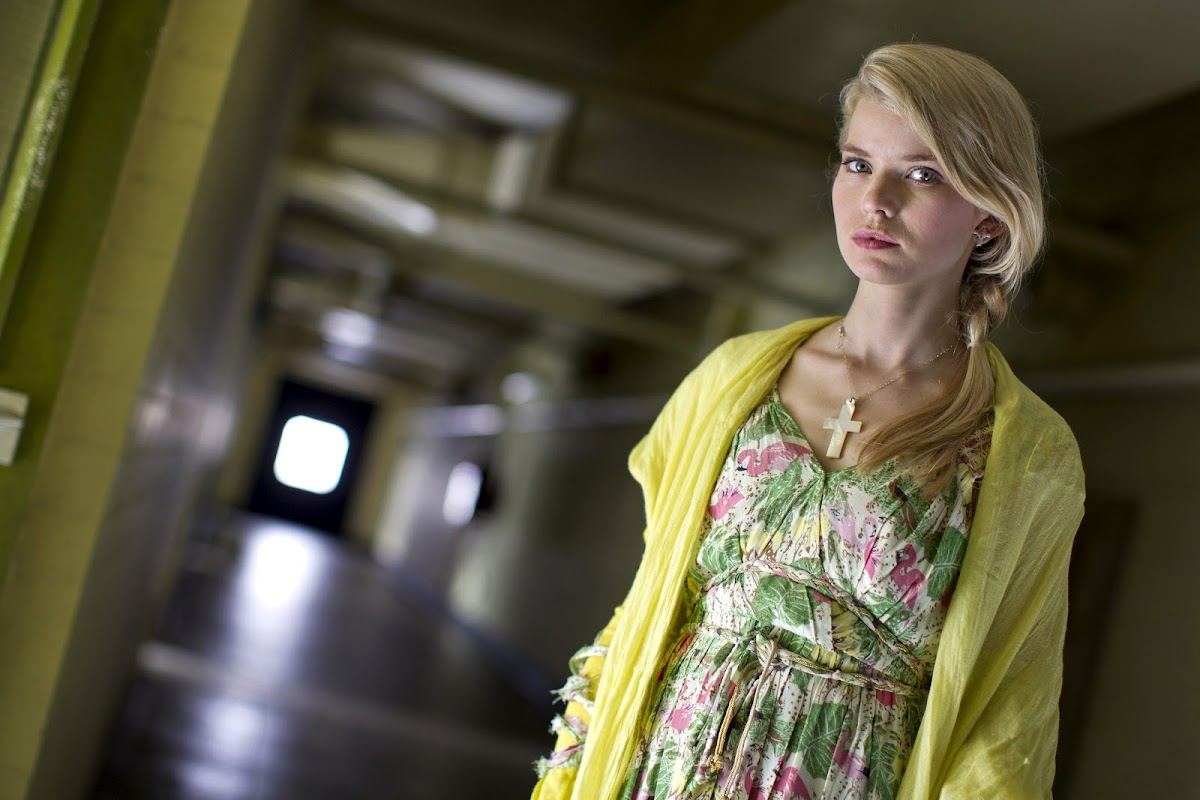 We always knew that nothing would be resolved in this, the penultimate episode of the season but the final 18 minutes of the episode were incredible.  The Woman explains her reason for appearing to Annie, Tom turns on the full moon and is set loose in a crowded nightclub and a new ghost enters the fray.

My heart was pounding out of my chest by the end of episode and we are left uncertain as to whether Hal has survived the events.

In the final sequence, the Old Ones finally arrive and who better to lead them than the esteemed Mark Gatiss? Oh, I think he will make a positively horrible nemesis.

I’m usually eager for the weeks to rush by in between my Being Human fix but I’d like this week to slow down! I don’t want to say goodbye to this fantastic show for another year!

The final episode “The War Child” will air this Sunday at 9pm on BBC Three.  Make sure you turn your clocks forward properly!