As season four of BBC’s Merlin nears it midpoint, “His Father’s Son” opens with Merlin being pursued, while wearing the full regalia of a knight of Camelot.   It is a trap and as Merlin’s pursuers close in on him, they suddenly find that they are surrounded by the real knights of Camelot.  They have caught a band of armed men trespassing on their land but this is no ordinary troupe.  It turns out that the leader of the men is no other than His Royal Highness, King Caerleon.  Forever the source of dark intentions, Agravaine remarks to Arthur that they would never have taken such bold chances when Uther was king and that Arthur needs to assert his authority on his land and send a message of his strength.  Agravaine counsels Arthur to give Caerleon an offer he can only refuse and that the only response therefore would be to kill him.

Warning: spoilers throughout this review.  Do not read further if you have not watched this episode.

Merlin balks at the idea and desperately tries to reel in Arthur’s moral compass.  The type of action he is contemplating can only leave a stain on his soul if carried out.

Merlin:  “Arthur, you've always shown mercy in battle. You've never sought to humiliate your enemy in this way. This isn't like you. This isn't who you are”.

Arthur:  “You have no idea what it is to make these decisions. Decisions that will shape the future of this land”.

Merlin fails and Caerleon is executed but at what price will this shallow victory come?

It is clear that Arthur feels the need to prove himself, to step out from under his father’s shadow.  In his crisis of confidence, he is pushing Merlin away and is instead accepting advice from Agravaine.  He distances himself from his normal compassion and bravery as he struggles to become something he is not, something he thinks people want him to become.

Agravaine:  “She's a beautiful woman Sire and possessed of many fine qualities, I have no doubt. But she is a servant”.

Arthur:  “That doesn't matter to me”.

Merlin has always approached this storyline with care but the theme of an enduring love between people from such vastly different stations in life has been central to the show.  Who could ever forget that incredible first kiss in "The Once and Future Queen"?  There are parallels here to the age-old prejudice and discrimination against not only class but also race and I was interested to see how it would be handled.  I was greatly disappointed then when Arthur seemed at first to resist Agravaine’s notions but later broke off relations with Gwen (Angel Coulby), telling her that their relationship is “not appropriate”.  Thankfully, Gwen sees straight through his insecurity and guesses that he is receiving advice from somebody else.  More assertive and impressive than ever before, Gwen delivers an incredible parting speech:

Gwen:  “Don't let anyone tell you what to do. You said you are your own man. You have a good heart. Be true to it. Only then will you be the king you want to be”. 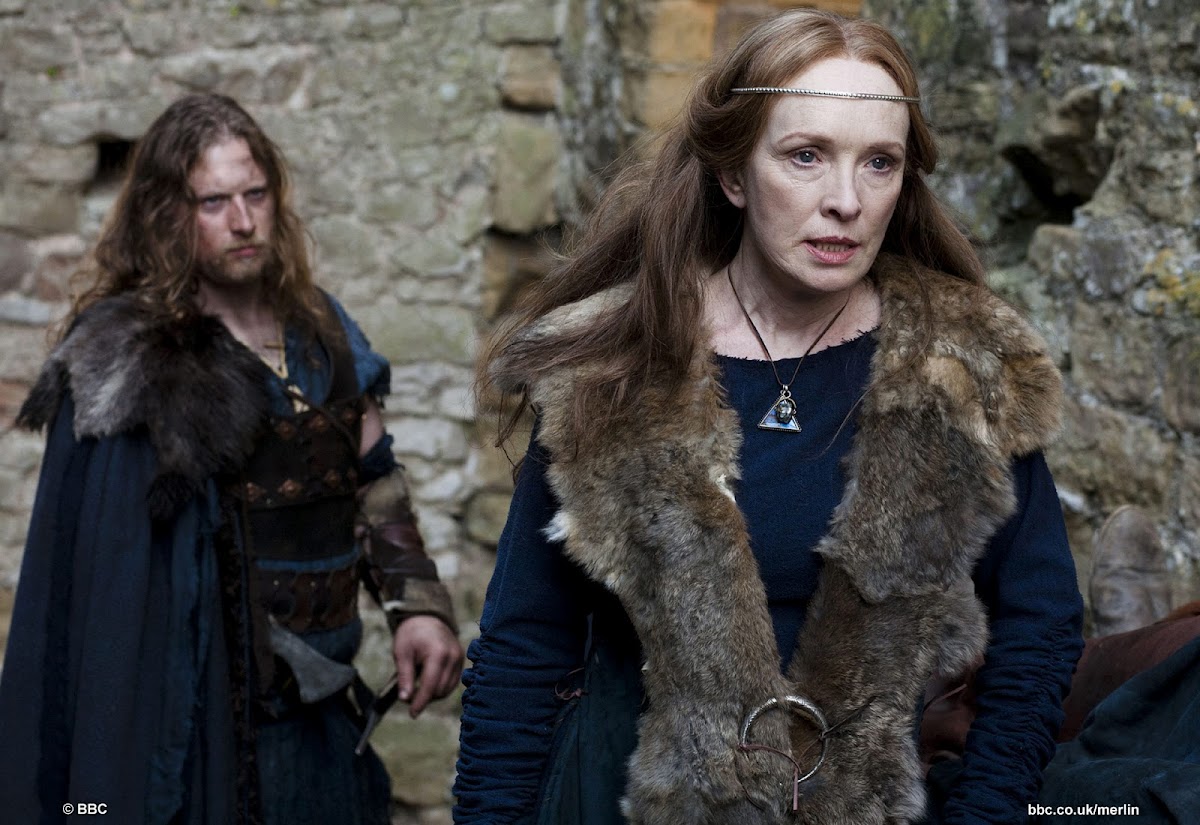 In the meantime Caerleon’s widow Queen Annis (Lindsay Duncan) has received his body and realising he was executed, departs immediately for Camelot to exact her revenge.   Ever the scourge, Morgana enters Queen Annis’s camp and schemes with her to defeat Arthur.

War descends upon Camelot as Queen Annis’s army marches.  They have Morgana but as Gaius says, Arthur is not alone.  Gwen remarks that she knows that but she is not sure that Arthur does.  She is right, Arthur is on a slippery path as he pushes his true friends away and seeks counsel in Agravaine.  Perhaps his turning point is when Sir Elyan (Adetomiwa Edun) and the rest of the knights pledge their bravery and support:

Elyan:  “We just want you to know there isn't a man among us who would not die for you. We made our pledge and we wear the Pendragon crest with pride. Tomorrow, we fight in your name, Sire. For freedom and justice in this land”.

Arthur realises that he has made a grave mistake, that he has brought war to Camelot and that his men must pay for it with their lives.  He steals into Annis’s camp and evokes the right of single combat.  If her man loses, she will withdraw her army and leave his lands.  If his man loses in this trial by combat, Queen Annis will gain half the lands of Camelot.

On hearing of Arthur’s deal, the knights of Camelot step forward, eager to fight for Arthur but he insists on being the champion (a decision he is no doubt regretting when he meets the seven-foot tall monster Darian).

There is so much to like about “His Father’s Son”.  Prolific British actress Lindsay Duncan was fabulous as Queen Annis, showing a great degree of strength, leadership ad wisdom becoming of a queen.  I enjoyed the themes of friendship and bravery and I especially liked the sword fight.  I love that once again, it was Merlin who saved the day and the whole of Camelot too. 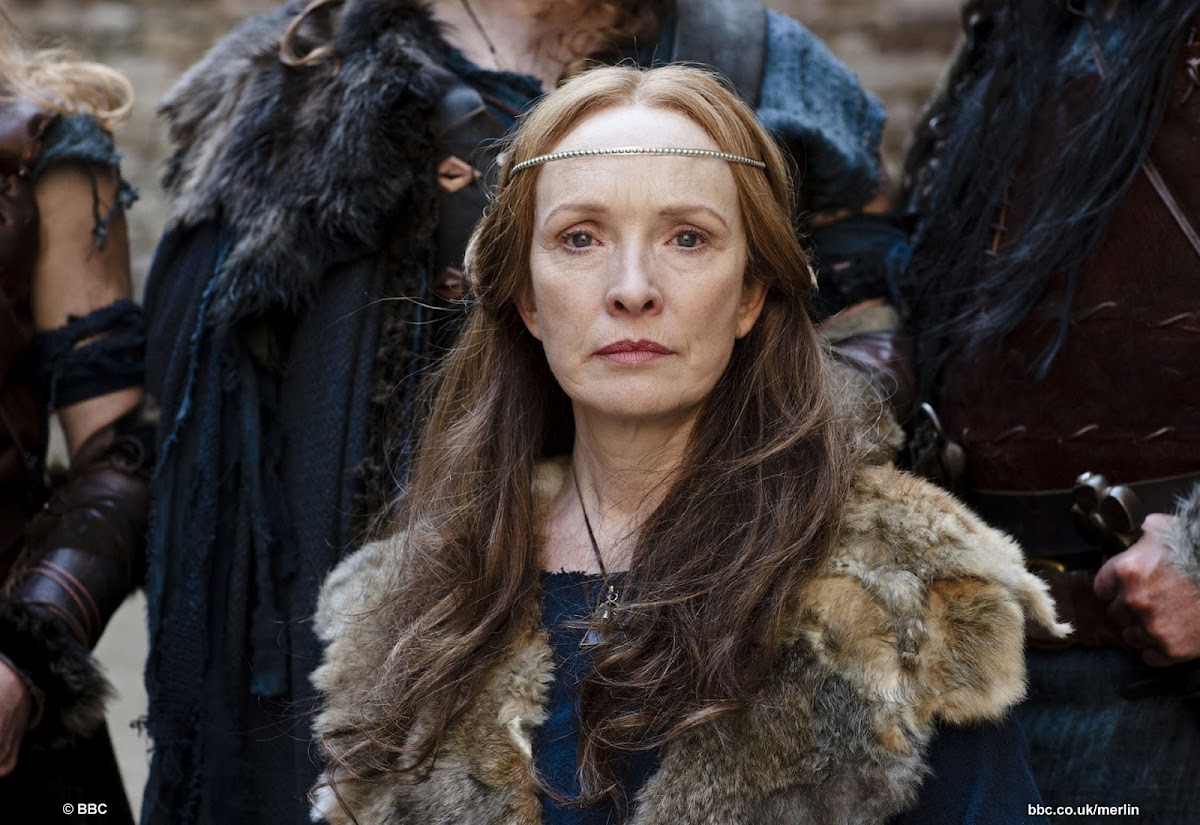 I truly dislike Morgana and Agravaine though.  I hate every second that they are on screen and literally want to jump through the screen and strangle Agravaine each time I see his smug face.  This is due in no small part to the excellent acting by both Katie McGrath and Nathaniel Parker, they absolutely own these roles and present my most hated villains of all time.  I have to admit though, Morgana gets better looking with every episode!

I also really disliked the scene where Arthur breaks up with Gwen.  I was absolutely disappointed and had to wonder why the writers did that.  Thankfully, I was more than pleased later in the show although I have to admit that I would not have been so quick to take Arthur back!

And the line of the episode goes to Queen Annis, speaking to Morgana:

Queen Annis:  “You are consumed by bitterness, Morgana. It spreads within you like a disease. In my grief, I let you infect me with your hate”. 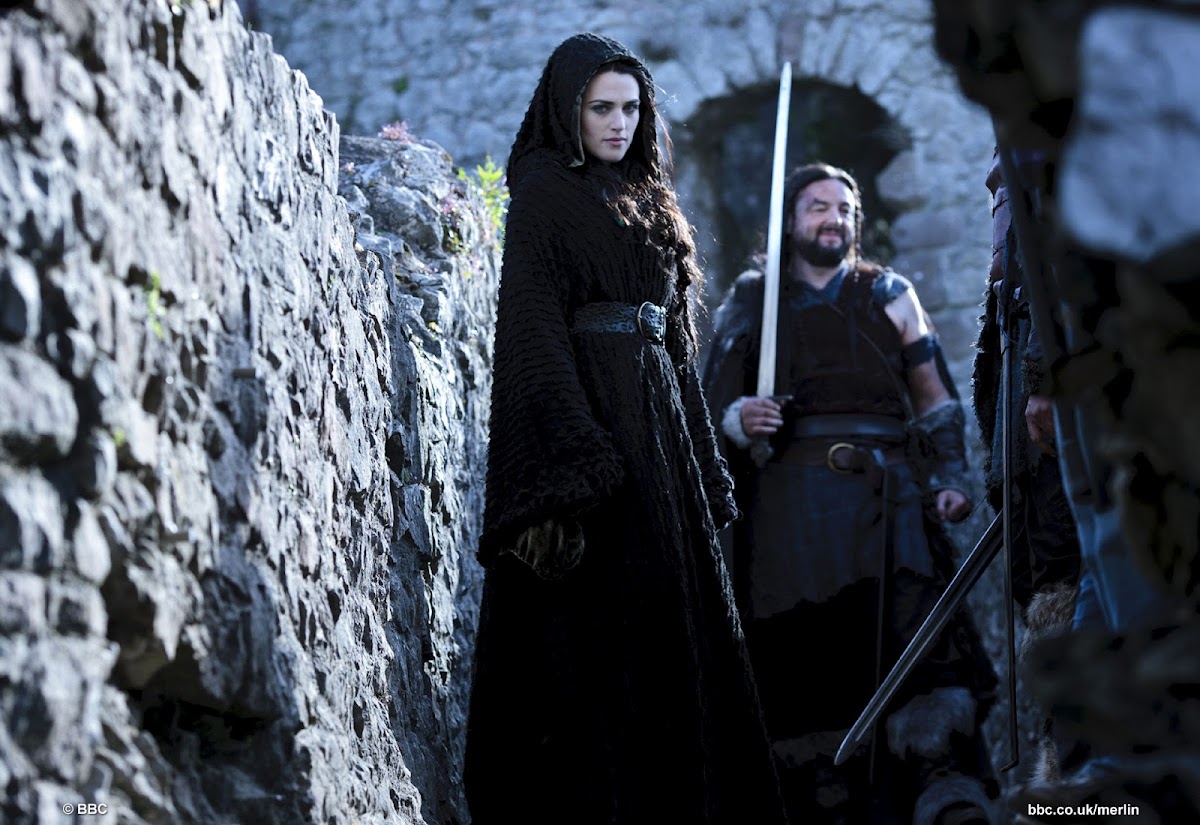