I love BBC Merlin, there is no denying that and episodes like “Aithusa” remind me why.  Merlin of legend is such a powerful, formidable and magical character and there is a point in this episode where you are absolutely convinced of that.  “Aithusa”  is where dragon lore, destiny and  Merlin’s coming of age collide and it is one of my favourite episodes of all time.

“Aithusa” opens with criminal Julius Borden (James Callis) entering into a Druid camp and helping himself to one part of the Triskelion of Askanar.  Stealing from druids? Now surely that can’t be a good idea!  He needs one last piece to complete the Triskelion and he sips into Camelot with the hopes of retrieving it. 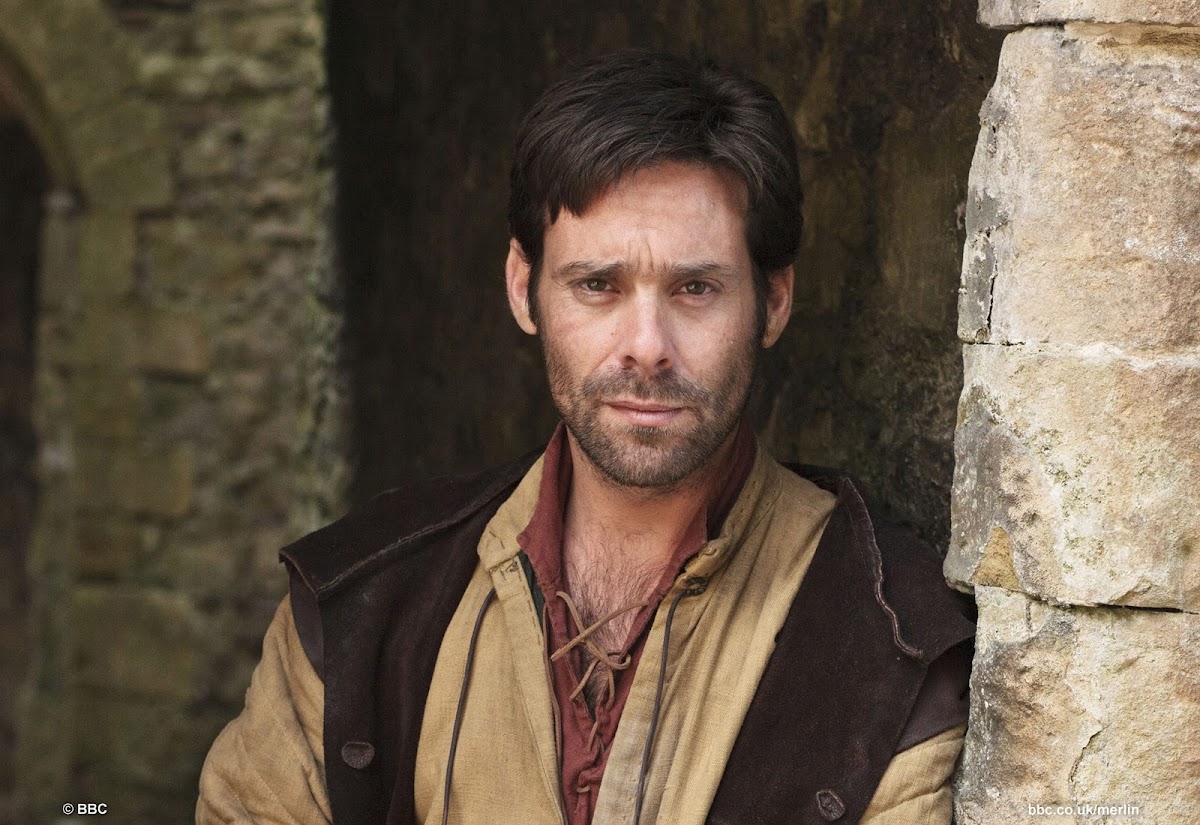 It turns out that Borden is a former pupil of Gaius although Gaius is certainly less than pleased to see him.  It seems that Borden weaves chaos wherever he goes and is more than happy to leave people in the lurch in the process.

But Borden has some news that piques Merlin’s interest.  If he can complete the Triskelion of Askanar, he can enter Askanar’s tomb and gain access to the last dragon’s egg on earth.  Oh Merlin, what could be more alluring than finding the last remaining dragon’s egg?

In spite of Gaius’s misgivings, Merlin wants to help Kilgharrah to save his kind and he rushes to summon the Great Dragon.  Kilgharrah leaves no doubt as to what he requires Merlin to do.

Kilgharrah:  “Merlin, you are a Dragon Lord.  It is a gift passed down from your father.  He gave up everything in his life to save me.  What do you think he would say?  The egg harbours the last of my kind.  I beg you Merlin, in your father’s name, promise me you will do everything in your power to rescue it.”

Merlin:  “You have my promise”. 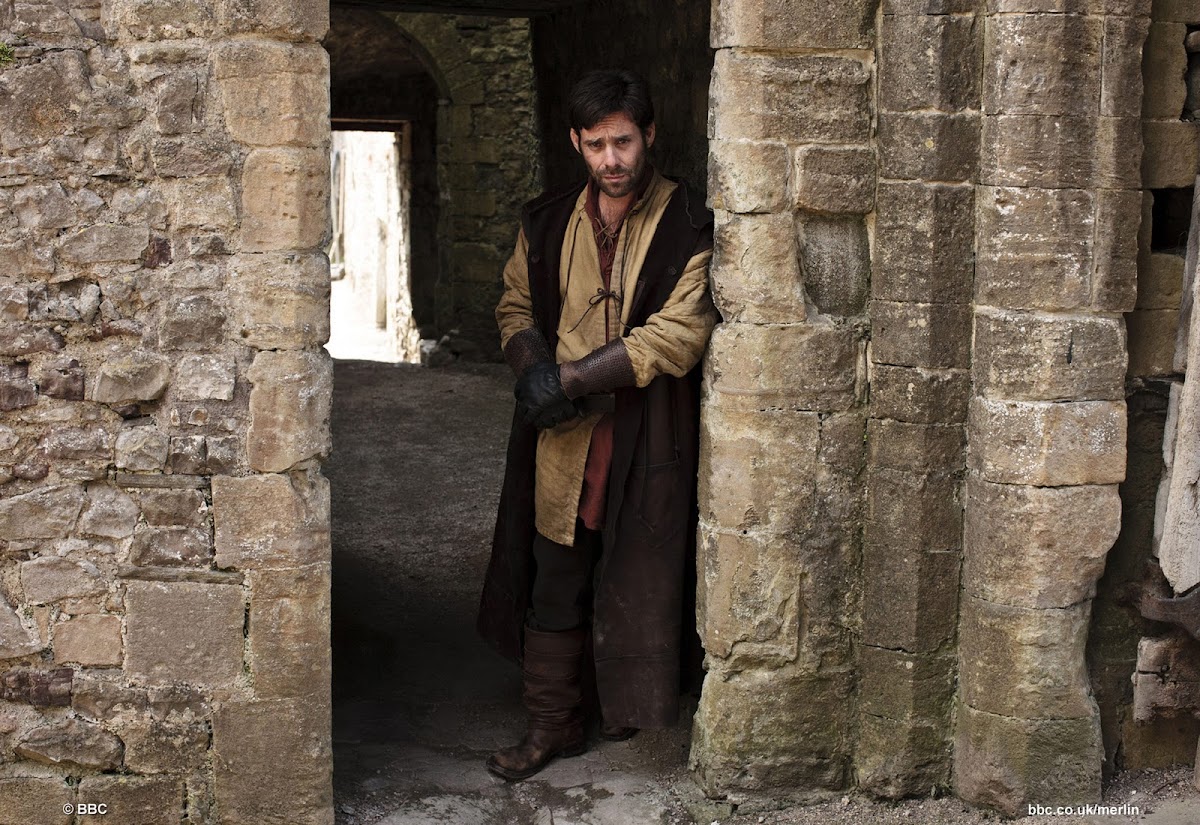 Unsurprisingly, Merlin decides to help Borden gain access to the treasure in the vaults where Borden completes the Triskelion and duly knocks Merlin out before escaping.  When King Arthur discovers a theft from his vaults, he wants to know hat was stolen.  Gaius tells him of Askanar and the dragons egg, and plans are immediately made to destroy the egg.

How painful must it be for Merlin, the last Dragon Lord, to hear them talking of dragons as the enemy, as if Uther did the right thing by destroying these creatures?

Agravaine: “A dragon’s egg could live for a thousand years.  Even today, it could still hatch and another dragon could be born into this world”.

Arthur: “So all my father’s work to rid the world of these monsters would be undone”.

Agravaine: “That must be our fear” 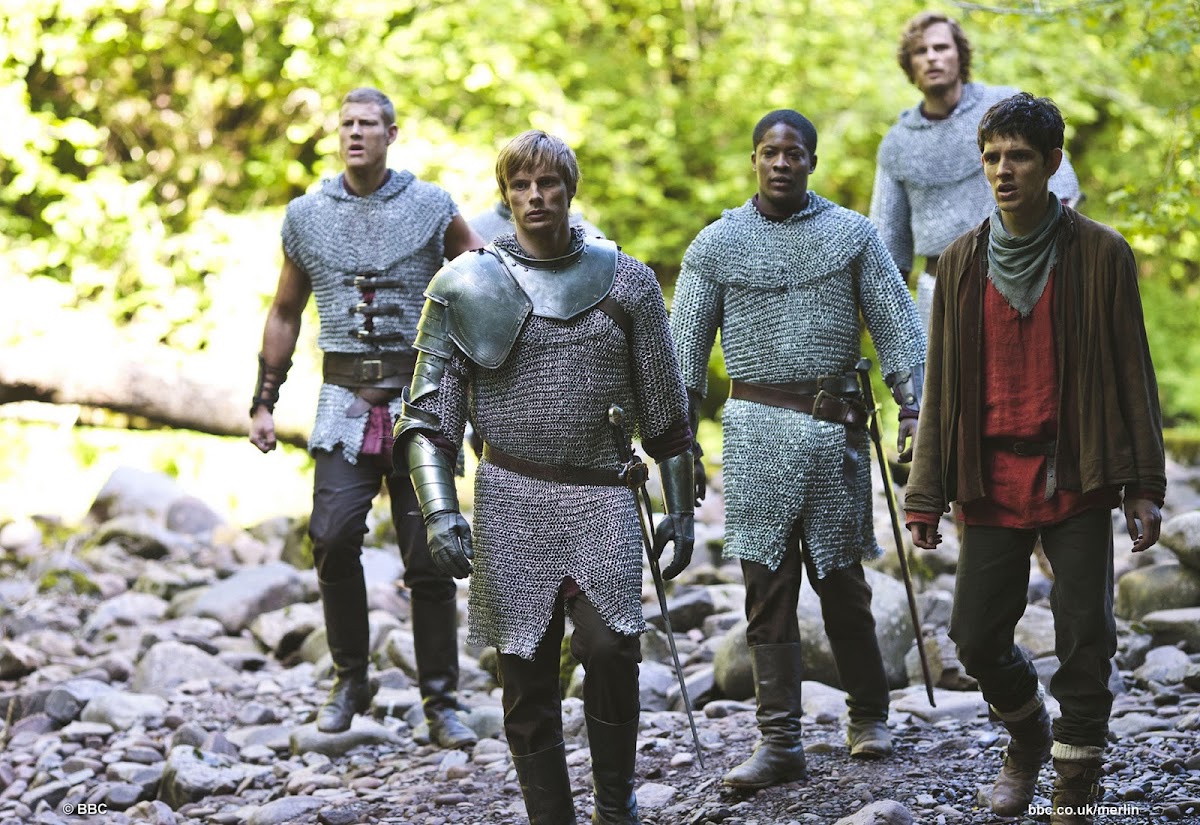 King Arthur, Merlin and the knights of Camelot embark on a quest to track Borden down and to reach the tomb of Askanar where they will destroy the dragon’s egg.

One evening, Merlin hears his name Emrys carrying on the wind and he enters the forest to meet Iseldir (Peter Sellers), the leader of the Druids.  Iseldir impresses upon Merlin that the Druids are not his enemy and he gives Merlin valuable advice on how to reach the tomb.

Iseldir: “Only when the way ahead seems impossible, will you have found it”. 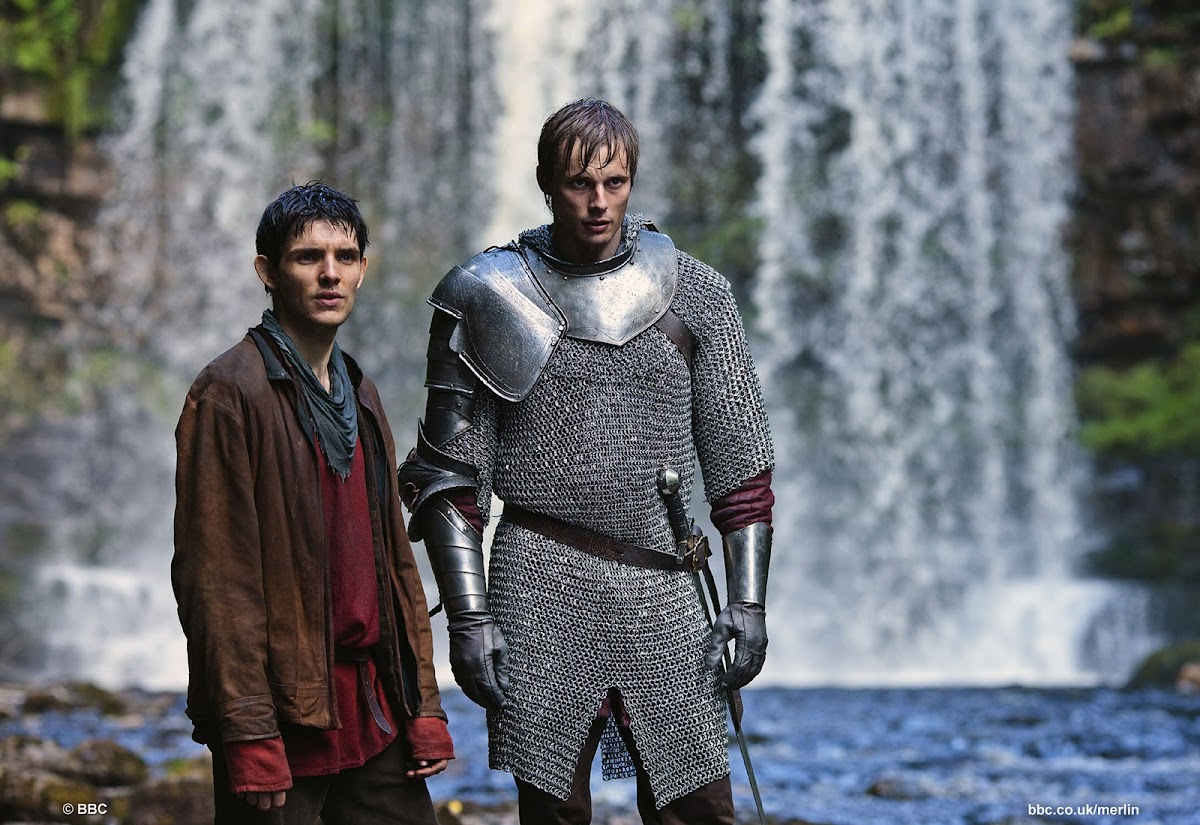 And so it is that they track Borden through a waterfall and out on to a plane where they approach the imposing and ancient tomb of Askanar.  There is so much to like about this episode in terms of scenery, forestry and, of course, the waterfall.  I love it when they film on location and BBC Merlin Filming Locations suspect this one was filmed in Puzzlewood in the Forest of Dean.

Warning: Spoiler ahead. Do not read if you have not watched the end of “Aithusa” 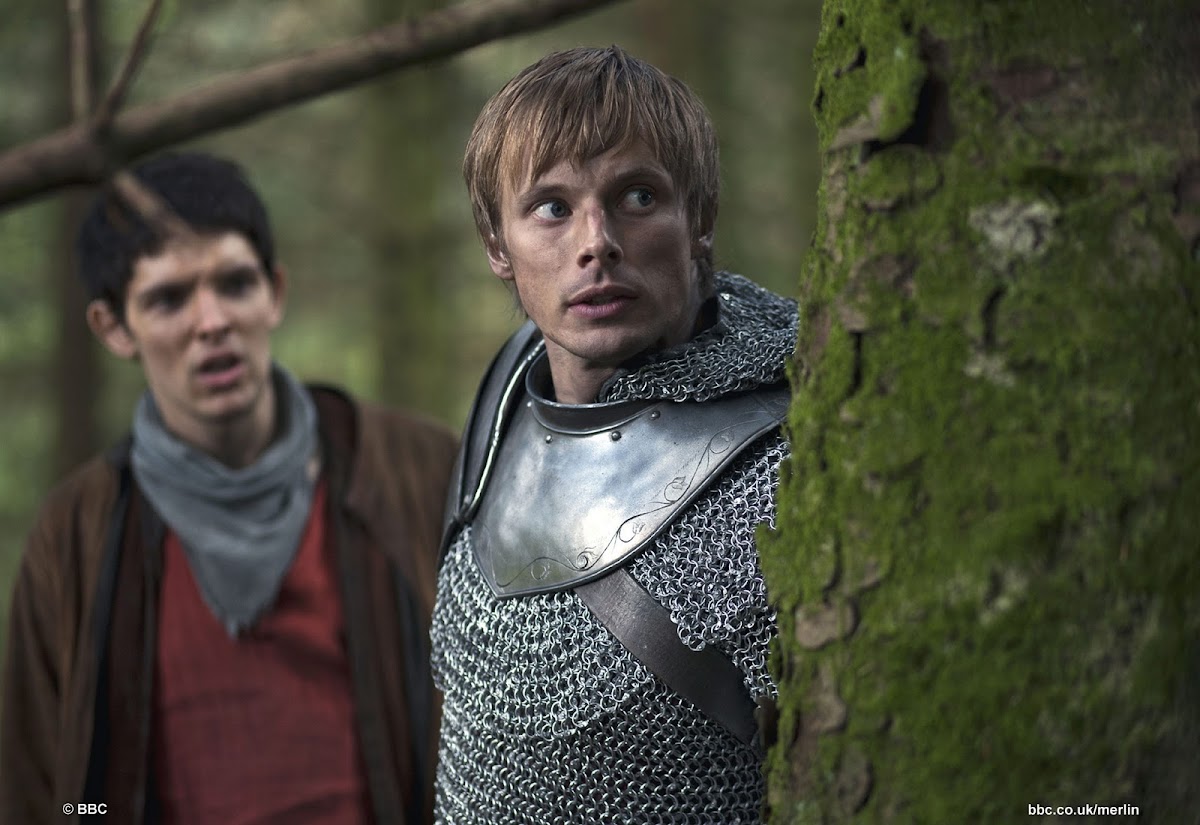 Borden attacks the party, shooting an arrow in to poor Percival’s leg.  They camp down for the night but Borden poisons their food, leaving Merlin to heal the party.  With the rest of the party unconscious, Merlin follows Borden into the tomb, despite knowing that it is a trap.

The scene with Merlin and Borden is near perfect and Merlin finally asserts the full extent of his power and might.

Borden: “With this dragon at our command, we will live like kings.  We will have the freedom and power to do as we wish”

Merlin (shouting): “Dragons cannot be used like that!  They must be left unshackled, free to roam the earth”.

Borden calls Merlin’s existence meaningless but we feel the power of the Dragon Lord.

Merlin: “Dragons are magical creatures, they belong to no man!  They are for the benefit of all”.

Borden: “What do you know, you are but a serving boy”

Merlin: “I am the last Dragon Lord and I am warning you. Leave this egg alone”.

BBC Merlin is often light and humorous but there is no denying that Merlin is the true hero of the show.  He might have resisted his destiny in the first seasons of the show, feeling overwhelmed at times during the previous season, but Merlin has finally come of age. He knows who he is and he has finally accepted the full weight of his destiny.

Colin Morgan absolutely owns this role right now, easily slipping into the dry and often sardonic role that Merlin is adopting.  The heart breaking reality is that the closer Merlin comes to classic Arthurian legend, the closer we come to the end.  I know that Merlin has been renewed for a fifth season but I wonder if that will be the last.  All of this is what I think about when I watch Colin Morgan acting because it makes me think about what a bright future he has ahead of him. 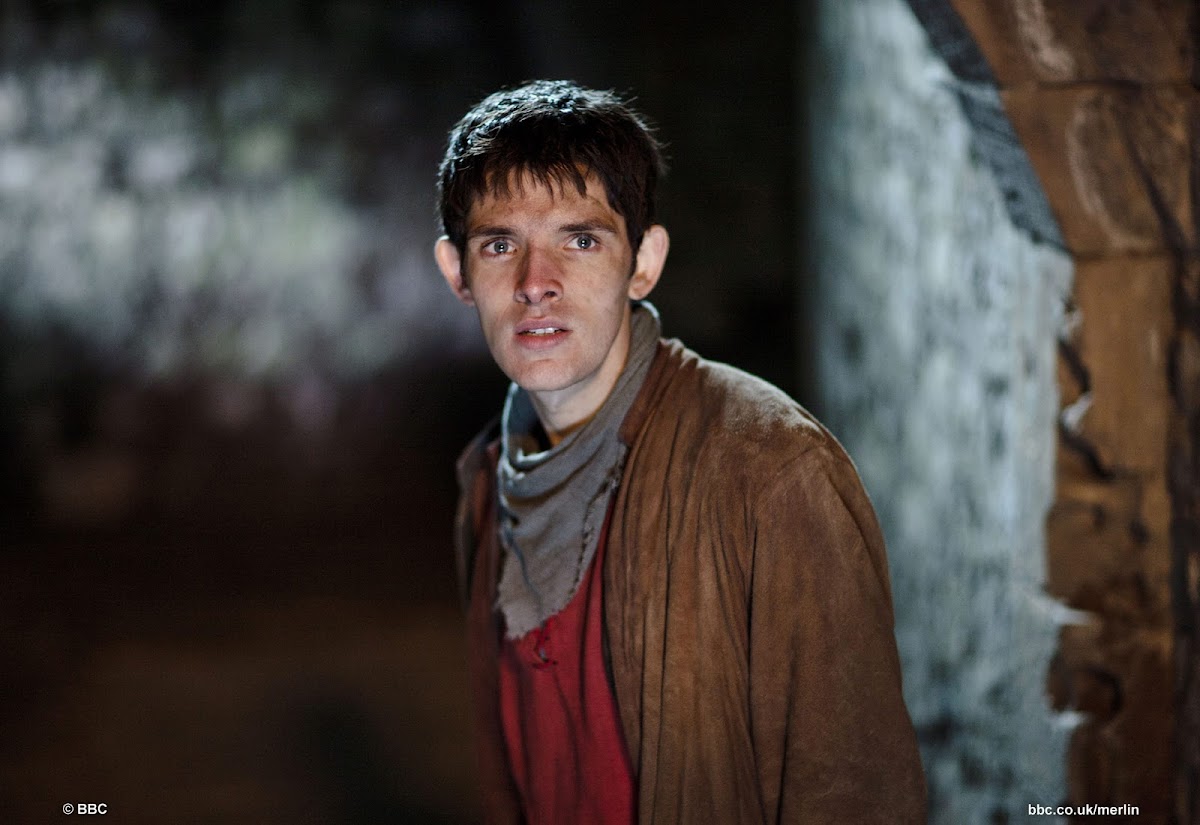 If I loved the scene with Borden and Merlin, where Merlin finally asserts himself and steps up to his destiny, then words fail me in the final scene with Kilgharrah.  I could watch that scene over and over again.

Merlin:  “When will it hatch?”

Kilgharrah:  “Young dragons were called into the world by the Dragon Lords. Only they had the power to summon them from the egg. As the last Dragon Lord, this solemn duty falls to you, Merlin”

Kilgharrah: “You must give the dragon a name”

Merlin (after pausing for a moment to think):  “Aithusa”

A white dragon named Aithusa, so named after the light of the sun.