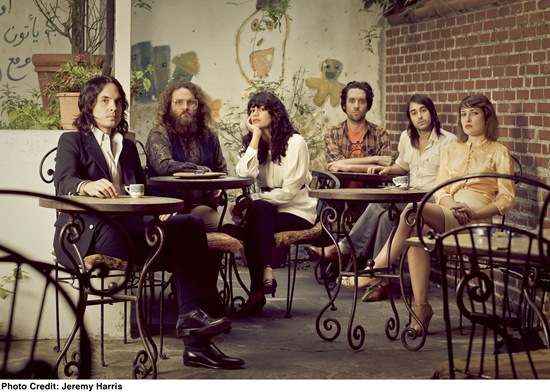 When I first encountered The Phenomenal Handclap Band, I wasn’t too sure what to expect but I was certainly intrigued by their name.  Described as a psych-soul band and a “tight-knit aggregation of musicians and artists from Lower Manhattan and Brooklyn”, I was immediately put in mind of the 1960s experimental band The United States of America.

Their eponymous debut album was a collection of funky, psychedelic tracks with pop anthem “15 to 20” earning them the most success.  I had always held a fascination for the music and culture of the 1960s and I appreciated that The Phenomenal Handclap Band could pay tribute to that sound while remaining fresh and current.

It was the powerful old school soul track “Baby” featuring Tommy Brenneck and Rodrigo Ursaia that caught my attention on the album The Phenomenal Hand Clap Band.  This is a beautiful, uplifting track that was followed up with a really good video, featuring stunning retro styling and excellent cinematography.

The Phenomenal Handclap Band was started by New York City underground club DJs Daniel Collás, the Witch Doctor, and Sean Marquand, the Medicine Man.  Tired of playing other people’s music, Collás and Marquand had a vision of a supergroup comprised of the best artists from the indie rock and soul underground in Lower Manhattan and Brooklyn.  They have previously worked with Aurelio Valle (Callas), Jaleel Bunton (TV on the Radio), Jon Spencer (Jon Spencer Blues Explosion) and Lady Tigra (L'Trimm).

The band are renowned for their intoxicating live performances and tore up the UK festival scene in 2010 with performances at Glastonbury, Wireless and Latitude.  They have most recently supported Bryan Ferry on his North American tour.

Naturally, I was eager when I heard that the band were returning with sophomore album Form & Control in early 2012 and that they had dropped the first single.  I listened to “Following” and it would be an understatement to say that I was surprised. I don’t think it would be possible for any track to represent a further departure from the sounds of the debut album than “Following” does.

Whereas the debut was a perfect example of funk and soul, “Following” is a progressive, indie electronic track that would make Ladytron proud.  And I love it.  I cannot stop listening to it and since first downloading it earlier tonight, I’ve listened to it 16 times and counting.

It makes perfect sense to me now why new wave master Bryan Ferry chose the band to support him in his US tour in September and October, given their updated, electronic sound.  I wouldn’t have expected to, but I really like this departure in style and I am eagerly awaiting the full album.

You can buy their music at Amazon.co.uk