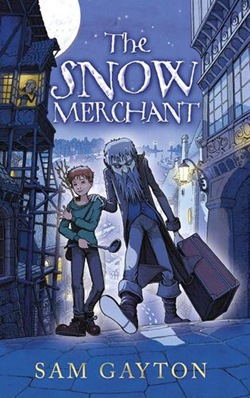 Very little compares to the experience of waking on a cold winter's morning and discovering that the landscape has been transformed into a winter wonderland overnight. Or better yet, staying awake late enough the night before to catch those first snowflakes as they begin their silent descent to the ground. It is a rare and treasured experience, as rare as encountering a truly unique and inventive imagination.

Sam Gayton's The Snow Merchant takes us back to the time before snow was invented (you did know it was invented, right?), when winters were long, desperate seasons of bitter cold and icy winds with none of the magic and adventure of today.

Lettie Peppercorn lives in a house on stilts, for she is forbidden from stepping foot on the ground.  Confined to her house, Lettie's days are filled with looking after the guests at the White Horse Inn while her father gambles and drinks away his sorrows.  He has never been the same since the departure of Lettie's mother several years before.

Fear not, this life of floor-sweeping, bed-making and soup-stirring is not too much for Lettie for, in her own words, she is not a child.  No, Lettie is twelve-years-old and she is the landlady of the White Horse Inn.

One windy and treacherous winter's night, a man with blue teeth and an icicle beard arrives at the inn.  Claiming to be the Snow Merchant, he turns pebbles into shillings and tells Lettie that she is his customer.  Lettie has no idea what snow is but she is quite certain that she can't afford it.

And so begins a wonderful tale of alchemy, intrigue and the creation of snow. Featuring a boy with a stalk growing from his shoulder, a woman composed of air and a pigeon fashioned from clay, The Snow Merchant is astounding in its imagination and creativity.  At times it reminded me of the works of Enid Blyton or Philip  Pullman but I am certain that I have never read anything quite this inventive before.

The Snow Merchant is beautifully illustrated by Tomislav Tomic as he brings to life the strange and exciting characters throughout the book. This is the perfect winter gift for both girls and boys aged 9 to 11 and I will be certainly be giving a copy of this book to every child I know this year.

This is exactly the kind of book that will stimulate imaginations and have young children squealing with glee.  I absolutely enjoyed every single page of this magical and impressive adventure.

Author Sam Gayton completed the Writing for Young People MA at Bath University in 2009. The Snow Merchant is his first novel but I don't think it will be long before he becomes one of the most treasured children's authors.   The Snow Merchant is another stunning novel by Andersen Press, the publishing imprint that has had a brilliant, award-winning year so far.  I am quite certain The Snow Merchant will be up for awards too.

The Snow Merchant is the type of book that defies rating scales as I would give it six out of five stars if I could.  Needless to say, it gets five out of five stars and I wholeheartedly recommend it. Whatever you do, make sure you get hold of this book this winter.

Rush out and buy The Snow Merchant at Amazon.co.uk