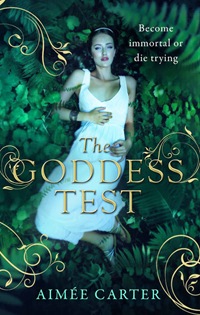 What lengths would you go to in order to buy some more time with your dying mother?  If you were offered a couple more days, months even, what would you be willing to sacrifice? Would you agree to become a prisoner, for instance, or enter a situation that you know might be fatal?  Or would you take the easy way out and make the simpler decisions?

The Goddess Test by Aimée Carter is a modern day retelling of the ancient Greek myth of Hades and Persephone.  When Kate’s dying mother expresses the wish to spend her last days in her hometown of Eden, Kate agrees to leave their life in New York City behind and start over again in a new school and new town.

Pushing a strange encounter at the gates of Eden Manor to the back of her mind, Kate starts classes at the local high school but soon finds herself in the crosshairs of cheerleader and queen bee, Ava.  Ava lures Kate to the grounds of Eden Manor one evening, hoping to play a nasty prank on her, but events take a tragic turn as Ava has a terrible accident.  Risking her own safety and overcoming her fear of water, Kate jumps into a river to try to save Ava but it is too late.

When the dark and brooding Henry appears, offering to bring Ava back to life if Kate will agree to spend the winter with him in his realm, the Underworld, Kate thinks she must be going crazy.  She nevertheless agrees to his request and is astonished when he brings Ava back to life.

Henry wastes no time in calling in his debt and as Kate stands on the threshold of a winter in the Underworld, she makes a deal with Henry.  He will keep her mother alive for the whole season while Kate is to take a series of seven tests.  If she passes, she will become a goddess and Henry’s bride but if she fails, she will never see her mother again.

There was a lot to like about The Goddess Test.  Kate Winters is a strong character who has had to sacrifice a lot in recent years on account of her mother’s illness, including her entire senior year and any meaningful friendships.  She knows her own mind and is not afraid to stand her ground and assert herself which is a trait that I always appreciate in young-adult heroines.  I really liked Henry too, which is to be expected given my weakness for dark, brooding and tortured heroes.

The whole storyline centred on Kate's mother, her illness, their relationship, her impending death and Kate’s reactions to that was extremely well-written.  I absolutely identified with Kate’s emotions and her need to bargain, and I found that it was entirely believable.   A lot of the book is dedicated to the relationship that Kate continues with her mother while she is in the Underworld and it takes place in her dreams, in Central Park.  These dreamy, surreal sequences were full of symbolism and meaning and were quite fascinating.

There was, however, one aspect of the story that I didn’t quite understand.  I could not figure out how Kate went from feeling like a prisoner and not exactly liking Henry to suddenly becoming hell-bent on saving him from himself.  In many ways, the development of the romance between Henry and Kate was nowhere as well-written as the relationship between Kate and her mother.

The actual tests were extremely subtle and all the readers knows throughout the novel is that Kate is being tested.  The big reveal comes at the end of the novel during the final reckoning.  I can’t say too much without giving away the plot but I wasn’t too pleased to learn that Kate had essentially been a pawn in a much bigger game.  It remains to be seen how Kate will fight back against this in future novels.

If the tests were subtle, then the links to Greek mythology were tenuous at best. When the identities of the gods and goddesses were revealed, I was quite surprised because little in the development of those characters had indicated their true identities.  This is, of course, something that can be built upon in the sequel Goddess Interrupted which is due out in 2012.  Without the need for secrecy and intrigue, the real intentions and personalities of the gods can be explored.

Author Aimée Carter was just 22 when she wrote this novel and she certainly has an impressive grasp of human interactions and motivations. If she puts more emphasis on the mythology and legends of the Greek gods, then this could become quite a powerful series.

The verdict is that this is an enjoyable, easy read and I will certainly be reading the rest of the books in the series. I give The Goddess Test 3.5 stars out of 5.

Buy The Goddess Test at Amazon.co.uk