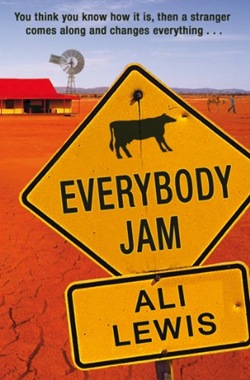 Everybody Jam is the stunning coming-of-age tale by debut novelist Ali Lewis.  It is set on Timber Creek Station, a cattle station in the middle of the Australian outback, and the story is narrated by thirteen-year-old Danny Dawson. The temperature is rising at Timber Creek, in more ways than one, as summer approaches and yet the rains refuse to come.  Added to this, it is almost time for the biggest event of the year on the cattle station: the annual muster where cattle are selected to go for slaughter.

Back at the station house, the Dawson family affairs are in disarray following the death of Danny’s older brother, Jonny.  His fourteen-year-old sister Sissy has just announced she is pregnant and refuses to say who the father is, much to the irritation of Danny’s father Derek.  In the midst of all of this chaos, Danny must come to terms with his grief while proving that he can fill Danny’s shoes and prove his worth on the station before going off to boarding school the following year.

Struggling to cope with a cattle station in jeopardy while looking after Sissy, Danny and their little sister Emily, Danny’s mum finally admits she can’t cope and hires a house girl to help them out.  Clueless and naive (at least according to Danny), English backpacker Liz arrives at Timber Creek Station and everything changes.

Everybody Jam is a powerful and exciting debut novel.  The book deals with some massive issues including grief, death in the family, teenage pregnancy and racism.  It also confronts the very real problems that occur in the Australian outback as the ravages of heat and drought run their course.  Ali Lewis takes all of this and weaves it into a complex yet ultimately readable story.  Written in Danny’s voice, her portrayal of the young protagonist is authentic and told with unflinching honesty as Danny mirrors the prejudices and casual racism of his parents.

The real charm of Everybody Jam lies in the vivid depiction of the Australian outback and the superb attention to the climate, landscape, language, accents and social proprieties of the region.  I was consumed by this novel and found myself yearning for the wide open spaces and natural beauty of Timber Creek Station once I’d finished the book.  Ultimately, this is an uplifting novel which shows that change is not always a bad thing and most of the characters in the book undergo significant personal growth and development by the end of the book.

Everybody Jam is recommended for young adults aged 12 and over but is not recommended for younger readers on account of some of the more complex issues that the book addresses.  This is a rich, compelling and important book and I would certainly recommend it to young adults and adults alike.  ‘Everybody jam’ is outback slang for apricot jam, so called because everybody likes it.  Like the jam, Everybody Jam is a book that everybody will like and there is something for everybody in this book.

Author Ali Lewis found the inspiration for Everybody Jam during the time that she spent on a cattle station in the Australian outback following the completion of her journalism studies.  She also spent time in India and travelled through Asia.  I certainly hope that she continues writing novels and look forward to further stories set in other colourful and exciting locations.  Everybody Jam is published by Andersen Press and I have no hesitation in giving it five out of five stars.

Buy Everybody Jam at Amazon.co.uk

Article first published as Book Review: Everybody Jam by Ali Lewis on Blogcritics.