Magic Study is the second novel in Maria V. Snyder's popular young adult series, The Study Trilogy.  Despite saving Commander Ambrose's life at the end of Poison Study, the execution order has been upheld and Yelena has fled Ixia and escaped to the land of Sitia.  She must uphold her promise to Master Magician Irys to learn to control her magic or forfeit her life.  Joining them on their journey are several children rescued from General Brazell’s realm at the end of Poison Study.  At the beginning of Magic Study, the travellers arrive at the Zaltana clan and Yelena is reunited with her family fourteen years after being stolen from them.

Her parents are overjoyed to see her, if not a little overprotective, but Yelena encounters hatred and bitter resentment from her brother Leif.  With Irys engaged in returning the last of the stolen children to their families, Yelena heads out with Leif for the Citadel where the council of Sitia are seated.  Consisting of four master magicians plus a representative of each of the eleven tribes of Sitia, the council will decide if Yelena qualifies to become an apprentice in the art of magic at the Citadel.

However, trouble finds them en route to the Citadel as Leif believes Yelena is a northern Ixian spy and he sells her out to Cahil, the last remaining member of the deposed Ixian royal family.  So it is that Yelena becomes embroiled in a struggle to prove herself to her brother Leif, to Cahil, and to the staff and students at the Citadel.  She is a stranger and an outsider and nothing is familiar to her.

At the same time, Yelena’s considerable magical powers begin to emerge and it becomes clear that she may be the only one who can fight against a surge in attacks against the students at the Citadel.  In a riveting adventure that sees Yelena travel to the distant Avibian Plains and the realm of the Sandseed clan, Yelena fights to uncover the identity of the person committing the attacks before she becomes his next victim.

Magic Study is a worthy sequel to the fantastic Poison Study.  I appreciated the change of setting and found the description of life and society in the Citadel to be as inventive and imaginative as life in the castle in Poison Study.  While Yelena’s relationship with Valek is central to the story, I appreciated the maturity and relative independence in the relationship.  While both Yelena and Valek are incredibly talented in their own fields and no doubt have their strengths, this is a match of equals and not of dependence. 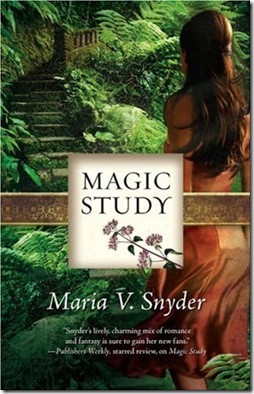 I loved the description of the desert landscapes, the plains and of the Sandseed clan.  I loved the similarities with Shamanism but also the distinctive social structure and beliefs of the Sandseed people.  I also loved the various aspects of Yelena’s magic and the notion of a soulfinder.

Unfortunately, as brilliant as the story, landscapes and magic were, there were two aspects of the story that I really, really didn’t like.  The first was Yelena’s ability to talk to her horse and the horse’s ridiculous name Kiki.  This aspect of the storyline felt hackneyed and Disneyfied as it was but was compounded by the portrayal of Kiki’s speech and thoughts as broken and monosyllabic.  It was a classic English-centric premise that really irritated me.  Similarly, there was horrible display of middle-class privilege where Yelena singlehandedly solved the problem of poverty and begging street children by teaching the street children a work ethic.  Once taught the value of an honest days’ work, the street children were able to save their families and even obtain work for their parents.  Um, no.  Children should be children and it is not their job to go out, find work and feed their families.

And so it was that a really good novel worthy of five stars became a three-star novel in my opinion.  It is a pity as I know this book could have been better than this.  I did enjoy the ending and the way that the story was resolved and will certainly read the final book in the series, Fire Study, but I have to be honest and admit that I was vaguely disappointed in this one.