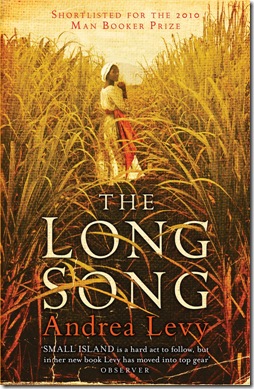 Before penning The Long Song, Andrea Levy was best known for her Orange Prize award-winning novel Small Island which featured the lives of four Jamaican immigrants to England in 1948.  That is all due to change now given the success of The Long Song.  It was shortlisted for the 2010 Man Booker Prize and is an epic tale set in the last, dying years of slavery and the early years of freedom on the island of Jamaica.

Andrea Levy explains that she got the inspiration to write The Long Song after witnessing a young Jamaican woman stand up at a London conference and ask the heartfelt question of how she could be proud of her Jamaican roots, knowing that all of her ancestors had been slaves.  Andrea Levy remembered her own feelings at that time and how she questioned why anyone would feel ambivalence or shame toward slavery.  It was at that point that she decided to give a voice to slaves that had been silent for too long, to explain the strength, ingenuity and intelligence that helped them survive all of those years as slaves.

The Long Song is not a book about slavery nor even racism.  It is the story of July, a house slave upon the Amity sugar plantation in Jamaica in the early 19th century.  July is conceived when her slave mother Kitty is raped by overseer Tam Dewar.  After a traumatic birth, July is fortunate to live with her mother for some years, helping in the fields to bring water to the field slaves.  That is until the arrival upon the plantation of Caroline Mortimer, plantation owner John Howarth’s widow sister, who takes one look at little July and steals her from her mother to be her personal companion within the grand plantation household.  It is a theme that will continue throughout the book.

July grows up in the household and Levy holds nothing back in telling the reader of the horrors of slavery while the narrator simultaneously manipulates her storytelling to show how malleable the truth can be when telling tales of days gone by.  The book is set against the backdrop of major events such as the 1831-1832 Baptist Wars and the end of slavery in 1838 and these events have significant and major consequences on the Amity plantation and life (and death) in the main household.

There are many major twists, surprises and rather unpleasant shocks in the story and by the end of the book, one gets a sense of the epic scope of the story.  While at first there does seem to be a happy ending to The Long Song, the magnitude of the suffering and injustice that July experiences in her life slowly begins to makes its impression upon the reader once the book is finished.  It is a touching and heart-breaking story and I believe that Andrea Levy has indeed achieved her goal of giving a voice to slaves by telling the story of just one slave.

It is clear that Levy undertook vast amounts of research in the workings of a sugar plantation of early 19th century Jamaica and she seemed to represent the speech and customs of both slaves and slave owners with authenticity.  Unfortunately, as Levy herself notes, there is very little in the way of actual slave history so it would be hard to tell.  However, as engaging and dramatic as the story is, The Long Song is a hard book to read and were it not for the deadline I imposed upon myself in order to finish it by this weekend, I would no doubt still be struggling through it.  I also found that in trying to explain so many characters through the eyes of July, none of them were really well developed and were somewhat flat.  This could be a deliberate act on the part of the author though as the narrator does attempt to distance herself from the people and events in the book as they become ever more painful for her to relate.

In terms of readability and my enjoyment of the book, I would rate The Long Song 3.5 out of 5 stars.  It is a good book and excellent to read and discuss at a book club.  I will definitely be reading Andrea Levy’s other work in the future.

Buy The Long Song at Amazon.co.uk