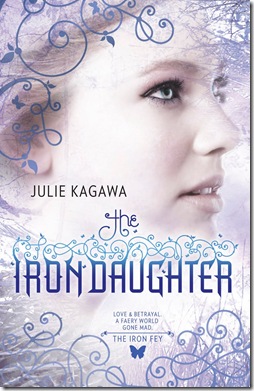 Julie Kagawa took the young adult world by storm in 2010 with her debut novel, The Iron King.   It was a tale of theft, mischief and chaos set in the land of the Fey, Faeryland or the Nevernever.  Featuring Oberon, the King of the Summer Court and a host of Seelie and Unseelie Fey, The Iron King is not your average fairy tale but hinted at the malevolent, tricky and mischievous beings at the very edges of our reality.

At the end of The Iron King, our heroine Meghan, the half-human daughter of Oberon, entered the Iron Realm and defeated the Iron King Machina.  She did that with the help of the Winter Prince Ash but it was only by putting herself in his debt that she was able to enlist his help.  No sooner had she returned to her own world, depositing her younger brother Ethan safely in the arms of her mother, when Ash appeared to call in his debt and demand that Meghan uphold her promise to return with him to the Winter Court.

The Iron Daughter opens with Meghan trapped in the Winter Court, awaiting an audience with Winter Queen Mab, who must decide her fate.  The ice prince Ash has become even icier, throwing Meghan into emotional turmoil over the future of their relationship.  After a somewhat desolate and frozen start to the book, mayhem ensues as the Winter Court is attacked and the Spectre of Seasons is stolen.  The subsequent turmoil and non-stop adventure includes racing through Faeryland and the reappearance of Puck; being chased by an angry dragon in the Briars; fleeing into The Between, the realm of the Dark Muse Leanansidhe and her army of outcasts and banished Fey; and a search and battle in Silicon Valley with its human and Fey drones, technology and countless threats.  In the midst of all of this action is a classic love triangle between Meghan, Puck and Ash.

While I struggled to suspend my disbelief in The Iron King and felt that the depiction of the creatures of Faeryland bordered on the ridiculous, I had no such problems with The Iron Daughter.  Julie Kagawa has really stepped up with this second novel and it far surpasses her debut.  The love triangle between Puck, Ash and Meghan kept me swapping sides and loyalties like never before and I found all of the characters far more sympathetic in this book.  One of the aspects of the book that I most appreciated was Meghan’s tendency to monitor and regulate her own self-pity and self-absorption.  Far from fall to pieces as Ash repeatedly withdraws his attentions, Meghan catches herself in her lugubriousness and just gets on with her quest.  Julie Kagawa’s Iron Fey series has been hailed as the new Twilight but I feel that it might surpass that comparison as Meghan Chase is far more secure and self-assured than Bella Swan ever was.

I also appreciated that a lot more of this book played out in the real world compared to the first novel.  That is, of course, if you can call the mindless ambition, ruthlessness and the pursuit of technology in Silicon Valley ‘the real world’.  As enchanting and maddening as Faeryland is with its wyldwood and lands of eternal twilight and winter, I look forward to the next book, The Iron Queen, which promises to start off in the mortal realm. 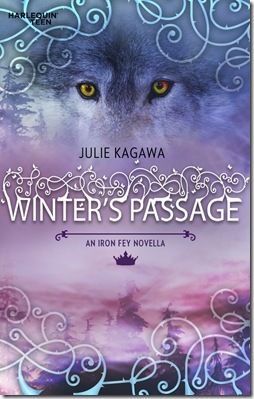 The only fault I found with the book was that I felt lost at times.  Granted, I had not enjoyed the previous book as much as this one and had struggled to relate to the characters.  This could account for me undervaluing certain events in the first book, especially Meghan and Ash’s closeness.  Nevertheless, I’d recommend reading Winter’s Passage first, after reading The Iron King and before starting The Iron Daughter.  Winter’s Passage is a short novella written by Julie Kagawa and set between the events of the two books and it certainly helps to flesh out the story and fill in some of the blanks.  Winter’s Passage is available in eBook form from The Iron Fey website or free of charge from Amazon Kindle.

In terms of the plot, I found that I guessed large portions of the story, especially the identity of Charles but I imagine that this was somewhat intentional on the author’s part, as she left breadcrumbs and clues for her readers.  In any event, I was pleased to see that the story turned out to my liking and I really liked the ending.  In terms of battles, the great battle at the end of the book was quite thrilling, full of the most unimaginable, wicked creatures and a full compliment of Seelie and Unseelie Fey.

I thoroughly enjoyed The Iron Daughter and cannot wait to read The Iron Queen next.  I am also pleased to see that a fourth book in the series, The Iron Knight, will be released later in the year and it will apparently be told from Ash’s point of view.  The comparisons with the Twilight saga continue and I really look forward to this Midnight Sun-esque twist.

I would give The Iron Daughter four out of five stars.

Buy The Iron Daughter at Amazon.co.uk