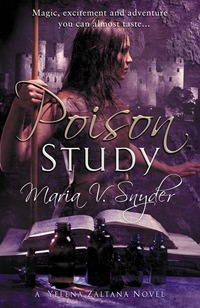 Young adult fiction has experienced quite the renaissance in recent years as it merged with the realms of fantasy and science fiction. Tales of wizards, witches, fairies, vampires, werewolves, banshees and even angels abound and the market has been left gasping for more magical creatures.

Poison Study opens with Yelena in chains in a dark dungeon with nothing to distract her from the horrifying memories that haunt her.  Yelena has killed a man and under the laws of Ixia, no mitigating circumstances can save her as murder is punishable by death. She has spent a year confined to the dungeons of the castle where the Commander of Ixia, Commander Ambrose, and his troops are based.  Her time is up though and she is scheduled to be the next prisoner to hang.

Yelena is dragged through the castle and brought before Commander Ambrose’s security chief Valek who offers her a choice.  She can pay for her crime and be hanged, or she can become Commander Ambrose's chief food taster.

In a world of intrigue, sabotage and poison, it is not much of a reprieve as Yelena could be fatally poisoned at any moment but she grasps at the chance to live and begins to train under Valek. Valek is an expert assassin and is also an expert in the detection of sabotage and subterfuge.  He imparts his valuable knowledge on poisons and poisonous substances which Yelena must learn quickly or face the fatal consequences.

As Yelena begins to make friends and allies, she also begins to make enemies and must choose carefully who she trusts. The biggest threat comes from General Brazell, as it was his only son that Yelena admitted murdering. As this threat manifests and whispers of an uprising emerge, the horrific details of the events leading up to Reyad's death emerge.

Poison Study is a deeply imaginative story and I felt thoroughly emerged in the life, politics and culture of the palace and Territories of Ixia.  Maria V. Snyder has created a complex and interesting world and I thoroughly enjoyed reading as she described in intricate detail the structure of the military oligarchy as well as the levels of organisation within the castle that must keep it going on a day to day basis.

The author states that she had great fun acting out the complex fighting scenes in the book (she is trained in Issinryu karate); this is apparent as Yelena learns to fight and defend herself and the fight scenes are fast-paced and exciting.  Likewise, all of the various elements of the story add to a rich and multi-layered story including the description of fitness and acrobatics; food and food tasting; cleansing and ritual; and, of course, the castle and military life. 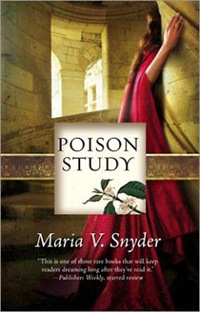 It is hard to believe that this book was written by the same author that wrote Inside Out (reviewed on Blogcritics in February).  Granted, both books are excellent stories set in complex societies; both Ixia and Inside are plagued by tyrannical, military-style rule where excessive levels of control are imposed on citizens; and both books feature a strong female protagonist.  The similarities end there though as Inside Out is a science fiction novel set in a future dystopia and Poison Study is a fantasy fiction set in a medieval kingdom far in our distant past.  The writing style is also completely different in the two books and I could barely recognise the author’s style even though I was reading the novels barely a month apart.

This ability to create completely unique, imaginative yet believable worlds and to weave great stories within those worlds puts Maria V. Snyder up there with my favourite authors Anthony Horowitz and Garth Nix.  There is no doubt that I will soon be ploughing my way through Maria V. Snyder’s complete works and I cannot wait to begin Magic Study.

I read the UK edition of the book and I far prefer these covers to those found elsewhere around the world.  They are quite stunning and make a great set sitting on my bookshelf.  Your can see the cover of the UK edition at the top of this post and just above is the second of the US editions (the covers had to be redesigned as the original model moved back to Russia).

I enjoyed every last page of Poison Study and would recommend it to fans of J K Rowling, Stephenie Meyer, Rachel Vincent, Julie Kagawa, Anthony Horowitz and Garth Nix.  I give Poison Study 5 out of 5 stars.