New Does It Offend You, Yeah? album finally out in March 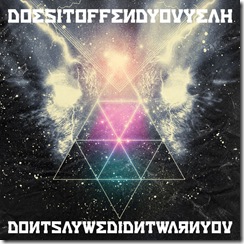 The wait is almost over.  The long anticipated second album from UK dance-punk act Does It Offend You, Yeah? (DIOYY) is finally available for pre-order on Amazon and iTunes.  DIOYY first burst onto the dance-punk and new rave scenes in 2008 with their debut album You Have No Idea What You're Getting Yourself Into.  They’ve been compared to bands like Justice and Klaxons but it their raucous live shows set them apart from other bands in the genre.  I had the pleasure of seeing the band at Exit Festival 2010 and they blew me away.  None of the locals that I had spoken to had heard of DIOYY before but after the gig, everyone was speaking about them.  Such is the live power of James Rushent on lead vocals and guitar; Rob Bloomfield on drums; Dan Coops on synthesizer; Matty Derham on guitar; and Chloe Duveaux on bass guitar that once you’ve seen them, you never quite forget them.

Don't Say We Didn't Warn You will be released on March 14, 2011 in the UK and March 15, 2011 in the US.  It was recorded in 2009 and 2010 and fans were originally expecting the album to be released in October 2010.  In August 2010, the release date was pushed back to January 2011 and in a bid to appease fans, the band offered their single “We Are The Dead” as a free download.  The second single, “The Monkeys Are Coming”, was released on January 23, 2011 and now, with a firm track listing for Don't Say We Didn't Warn You, it seems that we can finally stop holding our breath.

Together with the massive Australian band Pendulum, DIOYY are currently supporting Linkin Park on their nationwide tour of the United States.

Pre-order Don't Say We Didn't Warn You from Amazon.com

Article first published as New Does It Offend You, Yeah? Album Finally Out in March on Blogcritics.