Book Review: Inside Out by Maria V. Snyder 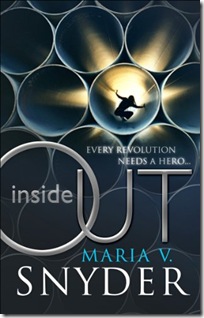 Maria V. Snyder is a best-selling author best known for her award-winning Study Series.  She published her first novel, Poison Study in 2005 and followed up with Magic Study in 2006 and Fire Study in 2008.  The Glass Series was a spin-off trilogy featuring characters from the Study Series and included Storm Glass and Sea Glass (both published in 2009) and Spy Glass which was released in 2010.  Both young adult series were set sometime in the past, in a world of fantasy, magic and sorcery but Maria now returns with powerful dystopian novel, Inside Out.

Trella is a scrub, a nobody.  Her sole purpose in life is to keep the pipes and air vents of Inside clean in order to benefit those living in the upper levels.  Inside is divided between those living on the upper and lower levels.  The Uppers are the privileged and fortunate, those people permitted to live in spacious family units in the upper levels of Inside.  Those living on the lower levels experience overcrowding and squalor and must work to support the systems that keep the inhabitants of Inside alive.  There are literally thousands of Scrubs living on the lower levels and they live in constant fear of being caught by the Population Control Police and being recycled as fertiliser.   Yes, that’s right, fertiliser.  Inside is a contained unit, like a box and sheep are farmed and vegetables produced using hydroponics and they will use anything they can use as fertiliser.

Nobody knows how big Inside is but Trella estimates that her world is approximately 2,000 metres long by 2,000 metres wide by twenty-five metres high.  She knows this because Trella prefers to be alone, to escape the corridors of the lower levels teeming with other Scrubs.  She spends her time in the pipes and hidden spaces between the levels and knows the layout of Inside like no one else.  This is how she comes to meet Broken Man.  He is literally broken and was the victim of a horrendous accident that left him confined to a wheel chair.  It was around the time that he was cast out from the upper levels and exiled to the lower levels so perhaps it wasn’t an accident after all?  Her best (and only) friend Cogon introduces Broken Man to Trella as a prophet and he tells Trella that he knows the location of Gateway, the mythical door between Inside and the outside world.  They know nothing about Outside and certainly don’t know for sure whether Gateway exists but Broken Man assures Trella that he can prove it to her if she risks everything to retrieve his discs from the upper levels.

Trella should have just said no. 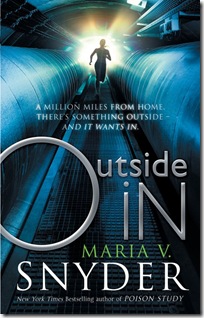 Inside Out is an incredibly imaginative, dystopian novel.  There are so many astonishing levels of innovation in Inside Out including the design of Inside; the structure of the working week and division into time scales divisible by ten; the social structure and hierarchy; and the detail of the hydroponics and self-sustainability of Inside.  Perhaps the best aspect of the novel are the two powerful, incredible twists in the story and the novel ends with the promise of further twists.

The book is strangely compelling considering the claustrophobic atmosphere of Inside and I found myself unable to put it down.  There were jaw-dropping moments where my heart was pounding out of my chest and that is no small feat for a young adult novel! At the beginning of the novel I had thought that Trella was a rather flat character but towards the middle of the book it emerged that this was by design, that individuality and free-thinking had just about been engineered out of the Scrubs.  All told, it is an enjoyable and exciting book and really well-written.

The sequel to Inside Out is called Outside In and was released February 15 in the USA and will be released in March 2011 in the UK.  Many young adult authors are concentrating on series and sequels at the moment and it can often be disappointing or tiresome to reach the end of a novel and discover a cliff hanger.  This was not the case with Inside Out and in fact, the book could easily be read as a stand alone novel.  I am looking forward to reading the sequel though as I know further twists are on the way.

I would recommend Inside Out to all fans of young adult, teen romance or dystopian fiction and give the book five out of five stars.

Buy Inside Out at Amazon.co.uk

Buy Outside In at Amazon.co.uk

Article first published as Book Review: Inside Out by Maria V. Snyder on Blogcritics.