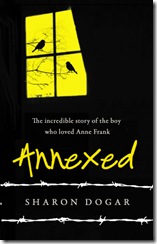 In 1944, fourteen-year-old Anne Frank pondered whether she would ever write anything great, anything world-class that would change people’s lives.  Anne Frank died in the Bergen-Belsen concentration camp at the age of fifteen, one of an estimated six million Jews that were killed during the Holocaust.  She would never know the profound effect that the hope and ideas contained in her diary would have on millions of children and adults worldwide as The Diary of a Young Girl (also known as The Diary of Anne Frank) became one of the most read and loved books of all time.

Otto Frank was the only member of Anne Frank’s immediate family to survive the Holocaust and it was Otto who edited and published Anne’s diary after the war.  He once remarked that he did not know the Anne Frank that people felt they knew and discovered in the pages of her diary and he concluded that “as parents we do not know our children”.  It is an interesting concept and by extension implies that readers could never really know the other characters in the book except as seen through Anne’s eyes.

In Annexed, Sharon Dogar tries to imagine what it must have been like to be Peter, the boy that lived with Anne Frank for two years and became the object of her affection.  She explores how it might have felt for Peter to know he was being observed and that Anne was writing about him in her diary. 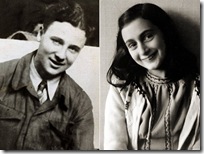 In July 1942, the Frank family went into hiding to avoid being called up to a Nazi work camp.  They were Jews living in Amsterdam during the German occupation of the Netherlands and they chose to hide in a small three storey annexe located above Otto Frank’s offices.  The family were joined one week later by the van Pels family (including Peter and his parents) and family friend Fritz Pfeffer joined them in November 1942.

Annexed begins as Peter watches his treasured girlfriend Liese and her family taken away by Nazis.  This sets the scene for the novel as the van Pels family must go into hiding too to avoid a similar fate.  The book is narrated by Peter and takes the form of sick bed musings as we are made aware that Peter is in the sick bay at Mauthausen concentration camp.  With aching honestly and frankness, Peter recounts the events that took place in the annexe, events that many are familiar with from Anne Frank’s diary, but from his own perspective.

The reader is immersed in the thoughts of a sixteen-year-old boy as he comes to terms with the probable death of his girlfriend, his confinement in the annexe and the passing of the last of his years as a teenager.  While Anne wrote of hope and her dreams for the future, Peter is painfully aware of the reality of their circumstances and the fate that might await them.  He considers his own mortality and lack of a future and wonders whether he will ever be with a girl.

In Annexed, Sharon Dogar perfectly portrays the sense of waiting, the confinement, and the fear.  The days might have dragged in the annexe as the seasons passed but this is a book that kept me turning the pages late into the night.  My inability to put the book down might have been where I thought the story was going and how it would inevitably end, an ending that is revealed in the preface of the book but nothing could have prepared me for the impact of those final pages. 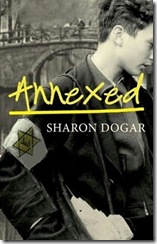 The first part of the book takes place in the annexe and mirrors the events in The Diary of a Young Girl but the second part of the story took place after that, once the families had been captured by the Nazis.  Gleaming what information she could from historical accounts and camp records, Dogar weaves together a tale of the experiences of the Frank and van Pels families at the hands of the Nazis.  It is horrific and heartbreaking and I found myself crying throughout the whole of the final section.

The book is not without its critics though and Anne Frank’s cousin criticised what she called a “sexed-up” version of events in the annexe.  With all respect to those critics, I have to disagree.  I found the portrayal of Peter to be sensitive, realistic and reflective of the morals of the time.

Annexed is one of two Andersen Press books that was shortlisted for the Costa Children’s Book Award.  This is a powerful, important and heartbreaking novel that I would certainly recommend for children and adults alike.  With Annexed, Sharon Dogar has written a relevant and important novel that will shed light on this period of history for a whole new generation of younger readers.  I have no hesitation in giving this book five out of five stars.

Article written by Emm and first published as Book Review: Annexed by Sharon Dogar on Blogcritics.  Affiliate links are used in this post.