Book Review: Out of Shadows by Jason Wallace 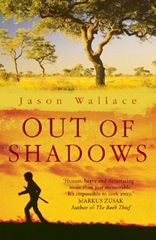 As I read the final chapter of Out of Shadows and placed the book upon my bedside table, I was faced with the almost impossible task of reviewing this incredible novel. It is a long time since I've read a perfect novel such as this; the type of book that captures you from the opening passages and takes you on a journey that haunts you for days afterwards. On finishing the novel, my head was a swirl of thoughts and emotions and I sat for ages as I turned the story over and over in my mind.

Out of Shadows tells the story of Robert Jacklin, the son of a British expat civil servant.  It is Zimbabwe, 1983: the long bush war has finally ended and Robert Mugabe is in power.   Robert Jacklin begins high school at a prestigious boys' boarding school and is immediately confronted with the racism and fear of the white pupils and their antagonism towards the few black pupils at the school. Robert's idealistic father has taught him that the outcome of the war was right and that it was only just that the country be given back to the Zimbabweans from whom it was stolen in the previous century. The task now lies with Robert to reconcile his father's liberal ideals with his need to survive the bullying and politics of a boys' boarding school when he is already an outsider.

Out of Shadows is at once devastating, shocking and compelling.  The reader is immersed in this world where the boarding school, steeped in colonial traditions and values, is a microcosm for the fear and attachment to the past of the greater white community.  Having more than a basic knowledge of the events in Zimbabwe in the early and mid-1980s, I felt that the novel was historically accurate and the accents and slang in the novel were authentic.

Markus Zuzak, author of The Book Thief, said this of the novel: ‘Sometimes a book takes you somewhere and keeps you there. Honest, brave and devastating - Out of Shadows is more than just memorable. It's impossible to look away’.  This is relevant because no book has moved me to this extent since The Book Thief and both books feature a searing exploration of the moral ambiguities and challenges facing young people in the most impossible of circumstances.  Out of Shadows is brutally honest and expertly examines the ignorance and fear that form the basis of racism.  It is at times breathtaking and painful and the reader cannot help but feel deeply for this tragic country where everything went desperately wrong.

Out of Shadows is an incredible yet plausible novel.  In addition to the themes of bullying, racism, politics and morality, the author runs several subplots that reference significant events in Zimbabwe at the time.  The boys repeatedly express fear that Robert Mugabe will ‘come after the white community next’ based on the massacres of the Matabele population by the Shona government (known as the Gukurahundi) and Mugabe’s secret yet lethal elite army gains increasing prominence in the story.  The story also covers the very beginning of the farm seizures where farmers were intimidated and forced to sell their farms to the government for a fraction of their real worth.  There is also the story of Robert’s parents, the lies that they tell and the ultimate tragedy and betrayal.

Out of Shadows is one of two Andersen Press books shortlisted for the upcoming Costa Children’s Book Award.  This is Jason Wallace’s debut novel and judging from this novel, he is an author to watch in the future.  As it contains some themes of a disturbing nature, Out of Shadows is not recommended for younger readers but is most relevant for children of ages 11-13 and over.  With its exploration of multiple themes and cross-section of a point in history that still has relevance in Zimbabwe today, Out of Shadows is an important book that will no doubt soon appear on both school and book club must-read lists alike.

I have no hesitation in recommending this book and giving it five out of five stars.

Buy Out of Shadows at Amazon.co.uk

Book reviewed by me and article first published as Book Review: Out of Shadows by Jason Wallace on Blogcritics. Affiliate links are used in this review.