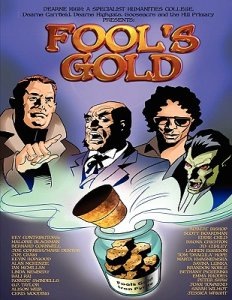 Imagine being a published author at the age of fourteen.  Well that is a reality for a group of students at The Dearne High, a specialist humanities college in South Yorkshire, England.  The students have produced and starred in a graphic novel of such astounding quality that it is hard to believe that it was made by children.

Fool’s Gold is a graphic novel about books, learning, history and social responsibility.  It is a treasure hunt and ghost story that features the students themselves as the central characters.  At its heart, Fool’s Gold is an educational novel but it is far from boring; it is an exciting and interactive journey through history that broaches the main issues that children and young people had to face in the past.

The novel is an absolute gem.  Graphic novels have long been considered a less intelligent version of reading for pupils that found real books too hard to follow.  The students from The Dearne High have turned this notion on its head as the story-within-a-story tells of the organisation, planning and effort that goes into a collaborative effort such as this.  Far beyond the historical and social value of the story, the students are carrying the clear message that this is something that anyone can do.  As Peter Shaw, Assistant Head Teacher of The Dearne High explains, “It is co-written and produced by students who are between the ages of 12-15, within a catchment area in the bottom 10% of all socio/economic indices within the UK”.

Fool’s Gold would not have been possible without the help of no less than ten award winning authors, two famous photographers and a professional illustrator.  The list of contributors reads like a veritable who’s who of contemporary children’s writers and includes Bernard Cornwell, Robert Swindells and Alison Weir.  Perhaps the most impressive to me, an old fan of graphic novels, was the involvement of former 2000AD editor Alan McKenzie and Marvel illustrator Kevin Hopgood.

Watch a feature from television's Calendar on the novel:

The story begins as three ghosts appear to three pairs of school children at The Dearne High.  The father of the three ghosts finally appears when all of the children gather together and they are told that they need to help the ghosts escape eternal damnation.  The children realise that they simply don’t know enough and they convince the school to undertake three educational trips.

The first trip is to the National Coal Mining Museum at the Caphouse Colliery in Wakefield.  Here they learn about the terrible conditions that child labourers experienced in the days of coal mining.  Children as young as seven years of age had to work underground for over twelve hours a day, six days a week. Many of them were injured or even died, as was the case with the first ghost.  On this trip, author Malorie Blackman gives a talk on the need for powerful themes in novel writing and she discusses prejudice and discrimination.

The second school trip sees them visiting the seaside town of Scarborough.  The children spit up into more manageable groups and they meet famous children’s authors Alison Weir and G P Taylor.  Together with author Chris Wooding, they investigate the story the second ghost, a young boy who fell through a section of weak plaster in an inn and became trapped and later died.  They also visited the grave of Anne Brontë who died so young at the age of 29 of pulmonary tuberculosis, then known as consumption.  The students also learn that she had to use a male pseudonym in order to get her work published.  The notions of pirates and the smuggling trade were introduced on this trip.

The final trip is taken to Whitby which is the town that inspired Bram Stoker when he wrote Dracula.  The story of the third ghost is told here as he discovered the wealthy land owner’s hordes of gold and was locked in by the land owner and left to die.  The connection between the fictional vampires and the money-grabbing, greedy land owners of the past couldn't be clearer.

It is no small measure of the success of this graphic novel that it has made me want to visit all of the locations that the children from The Dearne High visited and to learn more about the history of that time.  The fact that so many well known people volunteered their time to help with this project is impressive and also makes me want to learn more about them and their books.

The description of the graphic novel says that it is a book written by students for students but the quality is superb and I dare say that parents and other adults will want to read it too.  I’m certainly not giving up my copy!

Fool’s Gold was originally released in a delux interior colour version and is available on Amazon.com.  The version that I reviewed is the interior black and white version and is more affordable.  Readers from the United States can obtain this version at a cost of about $23 including postage directly from the school by emailing j.townend@barnsley.org.  This is the second book written by the students of The Dearne High.  The first was called Out of the Shadows: An anthology of fantasy stories as is also available on Amazon.

This article first appeared on Blogcritics.  I’d like to thank Peter Shaw from The Dearne High for sending me this fantastic book to review and would like to assure my readers that the opinions expressed here are my own.