Book review: A Yank Back to England: The Prodigal Tourist Returns – Denis Lipman 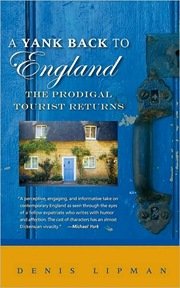 Part travelogue, part memoir, A Yank Back to England: The Prodigal Tourist Returns is a wonderful new book written by Denis Lipman.  Former magician and playwright Denis grew up in Dagenham which is a little town in Essex, England but he moved to the USA over twenty years ago to find his fortune.  A Yank Back to England chronicles Denis’s annual visits back to England to see his aging, Cockney parents.  While England is old news to him, his new wife Frances insists on seeing the countryside and convinces Denis to become a tourist in his old homeland.

The book is divided into six years but actually covers eight different visits.  In all of the chapters, Denis and Frances hire out a cottage in the English countryside and are joined by Denis’s parents Lew and Jessie and often by Denis’s aunt and cousin too.  Denis and Frances’s gorgeous little girl Kate makes her appearance in Year Two.

Year One: A Tiny Home on a Large Estate - Year One sees the Lipmans visiting the homes of Charles Darwin and Winston Churchill. They take a trip to Aldeburgh which is in Suffolk and visit the eastern most part of England.

Year Two: A Tudor Cottage in East Anglia – In Year Two, the family travel over to the lovely Elizabethan town of Rattlesden in Suffolk; they visit Melford Hall, the home of Beatrice Potter and they travel through the university town of Cambridge on the way back to London.

Year Three: Hard by The Masters House – It is probably safe to say that the landlords of the cottage they stayed in this year were not their favourites but Year Three was one of my favourites with trips to Winchester (home of King Arthur’s Round Table), Chichester and Arundel Castle in West Sussex.

Year Four: A Carriage House on the Saxon Shore – While staying at the haunted Carriage House in Year Four, the Lipmans visited the wonderful Broadstairs for the first time, where Bleak House, the home of Charles Dickens, is located.  Before departing back to the US, they also visited Blenheim Palace and Woodstock near Oxford.

Year Five: A Coastguard's House on a Pebble Beach – In Year Five the Lipmans stayed in their most dodgy cottage so far but they visited the seaside towns of Sandwich and Deal, saw Walmer Castle and took a trip back to Broadstairs.

Year Six: A Regency Cottage on a Bridal Path – In the final year, the Lipmans stay in the glorious Madrigal Cottage which was Denis’s favourite (and mine).  They also visit the AA Milne’s Hundred Acre Wood which is pretty exciting even if there was nothing to see!

While reading this wonderful travelogue, I was overcome by a desire to spend a summer holiday in a cottage in the English countryside and this feeling hasn’t gone away.  In fact, this is the kind of book that makes you want to follow in the Lipman’s footsteps and the see all the things they saw, no matter how quirky or frustrating they were at times.

And they were quirky and frustrating.  A Yank Back to England details shockingly bad service, classic English mediocrity and unpredictable English weather.  Poor American Frances was quite bemused at times while I’m sure Denis was thinking “I told you so”!  The massive appeal of this book though is that it takes you away from all of the traditional sights and sounds in England to ancient towns, stately homes, magnificent castles and a country so breathtakingly gorgeous when the sun is shining.  The sense of heritage is amazing as the Lipmans encounter attractions from many different eras including Viking, Roman and several millennia of English history.

The most touching aspect of this story though is the relationship that Denis shared with his parents Lew and Jessie and how he came to respect and understand them over time.  At times hilarious and at times incredibly touching, this is an lovely book that will certainly appeal to anglophiles.  As I chuckled to myself while travelling on the London Underground each day, I realised that this is a book that will appeal to just about everyone but certainly lovers of travelogues, memoirs and humour.

Watch Denis Lipman read an excerpt from his book: “Tony the Cat”

For being absolutely delightful and enjoyable, I give the book 5 stars.  I don’t think I will read it only once and I definitely think I’ll be consulting this marvellous book when planning my next adventures for Emm in London.