Doctor Who: Waters of Mars

Doctor Who: The Waters of Mars
Written by Russell T. Davies And Phil Ford
Directed by Graeme Harper
Aired 15 November 2009, BBC One

It’s the beginning of the end for the Tenth Doctor as the last of the Time Lords finds himself at the Bowie Base One space station on Mars on 21 November 2059. The Doctor makes his entrance with the prescribed amount of silliness of course:

The Doctor:  “The Doctor, Doctor, Fun”

The Bowie Base One is the first off-planet human settlement and once The Doctor establishes where and when he is, he realises that he needs to get off the planet immediately. This is the day that the Bowie Base One is destroyed and he can feel that something is definitely not right.

As the crew come to realise that something has gone wrong in the bio-dome, The Doctor is forced to accompany the Captain Adelaide Brooke and Dr Tarak Ital as they go to investigate the incident.  And so we are drawn into one of the most exciting and action-packed instalments of Doctor Who I have seen in years.

This is a colourful, inventive adventure and for once, I was not left feeling short changed by Russell T. Davies.  I loved how the episode was interspersed with “news footage” of the events of that day and together with The Doctor’s knowledge of what came afterwards, I felt it added depth and meaning to the whole story.

I don’t think it is too much to say that water plays an important part in this story but there I hope the possible spoilers will end.  Water is a fantastic element to use in a thriller and the whole episode keeps you on the edge of your seats with that claustrophobic sense of impending flood.

The Doctor:  “Water is patient, Adelaide. Water just waits. It wears down the cliff tops, the mountains, the whole of the world. Water always wins.” 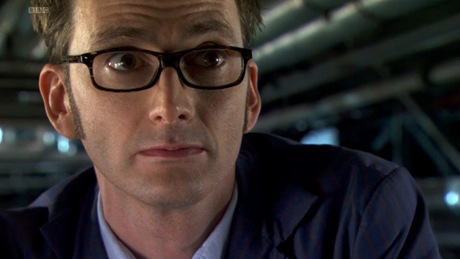 Of course, more exciting than the action and adventure is the story of The Doctor himself.  A Time Lord can regenerate twelve times and The Doctor we see on our screens today is in fact the same Time Lord as the one we met back in 1963.  He is currently in his tenth incarnation and we already know that we will see the eleventh Doctor by the end of this year.

The most amazing thing about the Tenth Doctor is that we have come to know that for all of his Universe saving and Earth protecting, he has a darkness and a fury that runs deep within him.  This was made perfectly clear in the “Fury of a Time Lord” speech at the end of (my favourite episode) The Family of Blood.

And so the end draws near for the Tenth Doctor and we come to realise that what might destroy this Doctor is not a physical death but his anger, his fury and his arrogance.

This was a fantastic episode and it might just be one of my favourites yet.  Nothing will ever top the Harry Lloyd episodes Human Nature and Family of Blood though.  (Happy birthday for yesterday Harry!)

All screencaps of the gorgeous and magnificent David Tennant are my own with full credit and copyright to the BBC. You can click on the images for their full sizes.  Feel free to use or alter the images but if you do use them, it would be super nice of you to credit Emm and link back to this blog or credit missus_emm at Livejournal.

For more posts on Doctor Who click the label below.