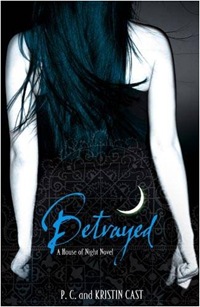 I really enjoyed Marked for its descriptions of ancient elemental magic and the way this was interwoven with Native American mythology.  I thought it was original and had an interesting take on the vampyre mythology.  Most of all, I loved the slow-burning romance with the strong, clever and mysterious Erik and I liked the strength and character of the protagonist Zoey.

My opinion of this book however is that the only person betrayed here is the reader.

Zoey is shown to have little to no character as she strings along three boys and is ultimately responsible for the death of two others.  I mentioned in my review of the first book that I did not take offence to what other readers had described as the authors’ overt and constant moralising as I had been a headstrong and opinionated teenager myself and felt that this read quite true.  But cheating on people and treating them like commodities is a bit rich coming from a character who has supposedly high moral standing.

From being principled enough to support Zoey in the face of huge peer pressure to the contrary in Marked, Erik becomes nothing more than a cardboard cut-out of a boy in Betrayed.  He is a mere disciple of Zoey now or better yet, a lap dog.

To be fair, there is an actual betrayal in Betrayed but so much of the book is spent on superfluous rubbish and minor details and then you get to the end to find a glorified “to be continued” notice.

I was actually almost offended by this  and the very English (and slightly rude) saying “taking the piss” comes to mind when I try to explain it.  Not enough happened in this book to draw it out over two volumes and I just don’t believe that they couldn't have finished the story in this book.  I don’t know what the actual story behind it was but I get the feeling that they were overwhelmed by the success of the first book and wanted to ensure that they could ride the wave for at least two more books.

I’ll definitely read the next book in the series Chosen but I’ll be borrowing it from the library this time and not rushing out and buying it like I did with the first two books.  I’ve heard that Chosen is quite good so we’ll see; maybe I will land up buying it in the end.

I give Betrayed three stars and reserve the right to come back and reduce that to two stars!