TV: Merlin on the way back this autumn 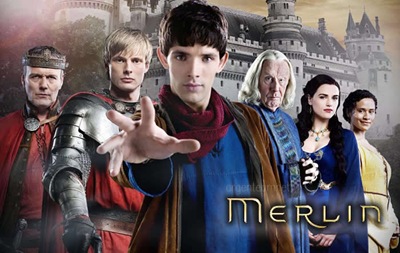 My lovely friend at Electric Bunnies reviewed Merlin season 1 the other day and I went online to see whether it had been renewed for a new season. The excellent news is that yes, in fact, it has been renewed and we can expect the second season of Merlin on our screens this autumn.

[Insert total tangent here] Is it just me or is it annoying when they say "back this spring" or "back this autumn"? US television begins with a big bang around September each year and seasons are an average of 22 episodes long. You know when a show is starting and you're also looking out for the new offerings on the various networks. Announcements are also really clear about what shows have been renewed or not and there are no 18-month hiatuses between shows. In the UK, they never give you a clear idea and shows can start any time from August to October or February to April respectively it seems. I also find that the start is often quite sudden with little advertising beforehand. I know I am often surprised to find that Doctor Who or Robin Hood is starting that week. If I didn't subscribe to TV Today at The Stage, I'd be completely lost. Maybe I need to pay more attention or buy trashy TV magazines? [end of useless tangent]

The excellent news was released on 26 May - once again, maybe I need to pay more attention? This is a really exciting, well written press release and gives an exciting glimpse of some of the guest stars we can expect to see in season 2 of Merlin.

From left to right, guest stars on the new show include Sarah Parish, Charles Dance, Adrian Lester, Santiago Cabrera and Mackenzie Crook. Let's hope this is a good one!