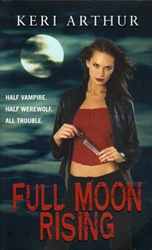 Full Moon Rising is the first book in the Riley Jenson series by Australian author Keri Arthur.  This is an urban fantasy set in Melbourne featuring Riley Jenson, a werewolf/vampire hybrid, and a host of other vampires, werewolves and other creatures.  This is not a young adult book by any measure and is suitable for adults only.
I’ve found it hard to rate this book because I kept having to restart the book and figure out what had happened before.  There could be two possible reasons for this.  The first is that I took out several “urban fantasy” books from the library (including the dreadful Guilty Pleasures by Laurell K Hamilton) and I didn’t like any of them except for this one.  I was still waiting for the third instalment in the Georgina Kincaid series at that stage.  So I had started about three other books without finishing them and was starting to get confused.
The other possible reason is that there was so much action in the book and the characters are rushing about exploring so many leads in their investigation that I just got lost at times.  There are also quite a few racy scenes which were great but also added to the distraction after a while.  I had to wonder if they were all necessary or if they were adding to the story.
In the end though, I did enjoy the book and I found Riley to be a really likeable character.  The fact that the story is set in Australia also gives the story a cool, unique twist and I enjoyed reading the book with an Aussie accent in mind.
I’ll definitely read the next book in the series and I might look into Keri Arthur’s other series too.  The Spook Squad series in particular looks good.
Given my positive overall experience but taking into account my being lost for most of the book, I give it three-and-a-half stars but I do think it will get better as the series progresses, as we get to know the characters and as the author settles into her style.