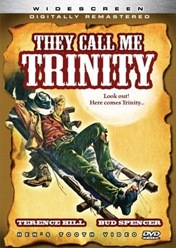 For a self-professed film addict, I have seen a scandalously low number of classic films in my time. In fact, I haven't seen any of the classics such as Casablanca or Breakfast at Tiffany's. Obviously, this is something I would like to correct over time and so I conceded when my friend Patrick suggested we watch They Call Me Trinity.

My biggest concern regarding old films had always been the quality. Grainy black and white pictures or garish Technicolor simply wasn't to my liking and that was often compounded by bad sound or a dodgy television signal (anyone who ever tried to tune in to SABC 2 knows precisely what I'm talking about). The best thing about the digital age is that these concerns are a thing of the past. We watched They Call Me Trinity on DVD on a giant flat screen TV with surround sound and the whole experience was fabulous. The film has been digitally remastered and the sound was brilliant. I am definitely going to try some of the other old classics now, starting with everything with Audrey Hepburn in and all the old Hitchcock too.

Terence Hill plays Trinity in a hilarious satire of the spaghetti western genre. This is the first film that Hill starred in with Bud Spencer and it shot the two to stardom in Italy and in the US. Trinity is a drifter who comes into town and finds his outlaw brother, Bambino, is posing as sheriff of the town. The film has all the hallmarks of a good western - the scenery, the bad guys (in the form of the ruthless landgrabbing Major) and fantastic music. But what makes this film special is the humour and the fabulous partnership of Terence Hill and Bud Spencer. I can see why they cashed in on their winning formula and made so many more films together. I would certainly recommend this film and will be trying ot get my hands on the sequel.

Wasn't Terence Hill gorgeous? I would have been crazy about him if I was around at that time. He has his own website at http://www.terencehill.com/ and it is full of great photos and stills from his film locations like the one below. I just love his irreverent style and can't wait to see more of him. 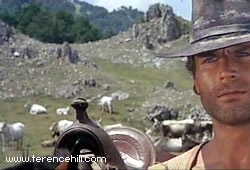 For entertainment, eye candy and introducing me to a whole new world of classic films and the spaghetti western genre, I give the film 5 out of 5 stars.