For those of us lucky enough to have TiVo or a PVR, I'm sure we've all encountered the following scenario in our homes: you set up a couple of shows on series link, safe and secure in the knowledge that come rain or shine, your trusty PVR will record the show for you to watch at a later, more convenient time (am I the only one that hardly ever watches live TV?). Anyway, you later go onto the hard drive of your trusty machine to discover that some random sports event (like the FA cup final) has conflicted with your programme and it hasn't recorded! Panic stations and loud arguments ensue and it is a definite grounds for divorce.

So you can imagine my reaction when Stephen told me that season 3 of the BBC’s Robin Hood had not recorded while we were on holiday and that we had missed four episodes. "Oh, that's nice", I said whilst stifling a yawn and continuing to read my trashy chick-lit novel. [Insert sound of brakes screeching and squealing tyres here]. Yup, you read right. I simply couldn't care less and given my initial reaction to this show a mere 15 months ago, no one is more surprised than me, believe me! So what is behind the decline from a five-star review to my current feelings of not even being bothered to find a one-star gif to post on my blog?

*** Warning: spoilers below – do not read if you’ve not at least completed season 2.  Contains season 3 spoilers too. 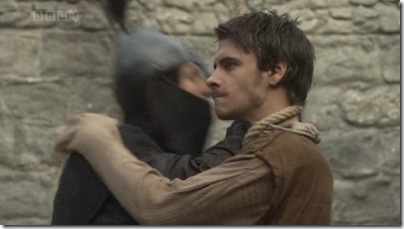 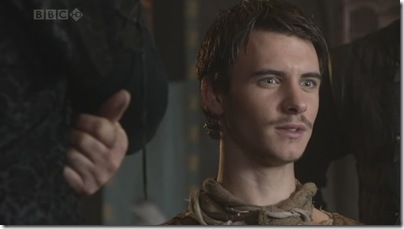 All images are my own screencaps from season 2, episode 9.
SHARE:
Posted by Mandy Southgate at 9:35 pm