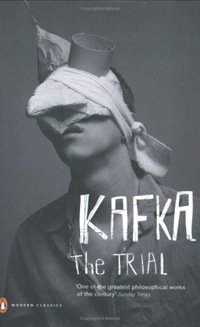 In my previous post, I discussed how lately I have been trying to read some modern literature classics.  I don’t think I am the type of person to ever read Dickens or the Brontë sisters (although one day I would like to try Wuthering Heights); but then again, I never thought I would be the type to enjoy chick-lit as much as I do.

The Trial by Franz Kafka is the second “classic” I have read this year (George' Orwell’s 1984 being the first). Unlike 1984 however, I didn’t enjoy reading The Trial as such but then that is Kafka’s great accomplishment with this book in that he leads his reader to feel as helpless as his protagonist.

The Trial is about a man called Josef K, a middle-class, middle management banker, who awakes one morning to find himself under arrest.  Not once in the book is he (or the reader) told what the actual charges are and in fact, he finds it quite hard to take the whole “process” seriously.

The original German title to the book was “Der Process” and in fact, I find this may have been a more accurate title as the book chronicles K’s process through court bureaucracy, learning of the seriousness of the charges as the whole matter starts to permeate into all aspects of his life.

According to Wikipedia, there have been two major interpretations of this work.  The first is that it refers to “human existence” and that the start of K’s trial is when he wakes up one morning and questions his own existence.  This is supported by the undertone throughout the book that his guilt is not entirely criminal.  I don’t personally subscribe to this theory but imagine that people better versed in religious or metaphysical texts might see the similarities.

The other interpretation is that this is a reflection of the process of marriage and social relations, mirroring Kafka’s own relationships and failed engagements.  I find this interpretation to make far more sense and can identify with the idea that once you tie yourself to someone, you are no longer in control of your own decisions.  Men, especially, often feel they are at the mercy of their in-laws once they have bought that all important ring.  Nevertheless, without giving away the story, I still find K’s closing words to be a little harsh.

This is an excellent book that was left by Franz Kafka amongst his papers when he died.  He asked that the book be destroyed but his friend Max Brod went against his wishes and published the book.  One of the chapters was unfinished and in later years it has been suggested that the chapters might have been presented in the incorrect order.

This is a fine book and I would recommend it to lovers of modern fiction and existentialism.  It can be a bit tedious to read at times and for that reason, I give it four out of five stars.