I must say, I was a little confused about this one.  I thought we were watching the film that had won Best Animated Feature Film this year but that was WALL·E.  Well that explains it then - Bolt was cute and funny but I didn't think it was Oscar material. 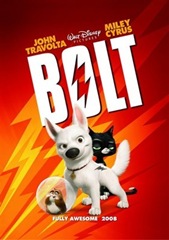 We decided to watch Bolt yesterday because Keira, my almost-three-year-old godchild was visiting.  It was a lovely, original story about a dog called Bolt who is the star of his own fictional television series and does not realise that it is all just a story.  In a bid to save his "person" who he thinks is in danger, Bolt is accidentally shipped off to New York and has to make his way back to Hollywood.

It was a cute story and it made us all laugh quite a lot (toddlers and adults both!) but it was just missing something.  I thought Bolt was really well done and I loved how John Travolta did his voice but I didn't think the cat, Mittens, was particularly well done.  Not that Susie Essman did the voice badly, it's just that the cat character was obviously written by a dog lover.

It's really obvious that Bolt was done by the same people that did The Incredibles in that the animation, voices and humour are all similar.  It's just that The Incredibles was that good and as I say, Bolt was a sweet story but it's just not all that great.

It was entertaining though and I give it 5 out of 10.