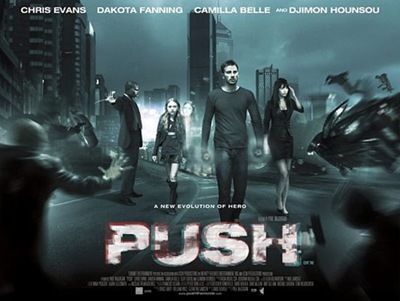 Yesterday morning we went to watch Push, the new sci-fi thriller from director Paul McGuigan starring Chris Evans and Dakota Fanning.  I really enjoyed every single minute of this film even though it felt slightly long at 111 minutes.

In the world of Push, psychic experiments started by the Nazis were carried on after World War II, resulting in people with superhuman powers.  'Pushers' can push thoughts into your mind and make you believe in their version of reality; 'movers' have telekinesis; 'watchers' can see the future and 'shifters' have the amazing power to alter your perception and create illusions.  The problem is that 'Division', a US government agency, wants to control all of the people with these powers, to keep them captive and to carry on experimenting on them.

This brings us to the underworld of Hong Kong, where a group of young expats is thrown together in a fight against Division and the local branch of deadly psychics.

This film reminded me in so many ways of Anthony Horowitz's Power of Five series and Garth Nix's Shade's Children.  I loved the inventive storyline, the supernatural powers, the fast pace and explosive action.  I was really disappointed to see that the film got such bad ratings on both IMDb and Rotten Tomatoes.  On RT, the film received better ratings from the community than the critics and perhaps that is the point.  This is not a serious movie or an art house film.  It might not appeal to everyone but I imagine that lovers of sci-fi or fantasy young adult fiction might enjoy it as would anyone who enjoys fun, action and teenage superheroes.

Dakota Fanning deserves special mention.  I knew before going to see the film that it had received bad reviews and I also knew that there was talk of Fanning appearing as Jane in New Moon.  I was prepared to be critical and I wasn't sure if I would like the way Fanning was turning out.  Well, her performance was great and I think she is making the move from child star to teenage actress seamlessly.  She seems to be a serious, clever girl and I hope she continues to make decent decisions in both her personal and professional life.

For reminding me of my favourite books, for action, adventure, supernatural powers and teenage heroes, I give the film a 9 out of 10.  Like I said, it just felt a bit long which can happen with non-stop action.