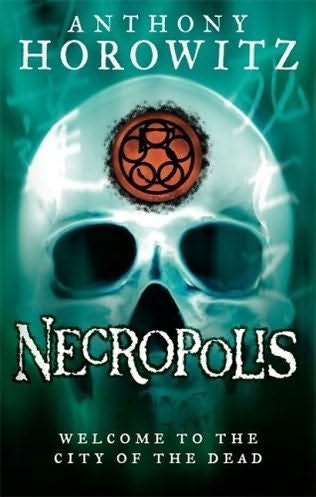 I discovered two outstanding authors in 2008, namely Anthony Horowitz and Garth Nix. They are both masters in the young adult fantasy or science fiction genre and I discovered them while trying to fill the void left in my life after finishing the Harry Potter (JK Rowling) and His Dark Materials (Philip Pullman) books.

In October, I wrote about how impressed I was with the first three books in The Power of Five series by Anthony Horowitz and I was waiting (not so patiently) for the latest book in the series - Necropolis. Does this fourth book live up to the promise of the previous three books in the series?

I felt like an excited child when I opened up the package from Amazon and I noticed with glee that the pages of the book were teal-edged to match the front cover. The cover of the book is metallic and shiny and really did look quite the Halloween treat!

The fourth book focuses mainly on the last of the Five, Scarlett Adams, as she is taken by the evil Nightrise Corporation and held hostage in the dying city of Hong Kong. This book does not have the fast and frantic pace that the other three books had and on the surface, it appears that there is not as much magic in this book as there was in the other books.

In the end though, the book absolutely does deliver and it has a magnificent and explosive ending. We realise that the magic was there all along but that we simply weren't noticing it.

Naturally, being a book series about the Power of Five, there are five books in the series. Necropolis perfectly sets the stage for the final book yet I have to admit that I don't think it would be able to stand alone as a story on its own. On second thoughts, a lot happens in this book to Scarlett and in the end, none of the books could have stood on their own because you are always going to want to rush to the next story so that the Five can come together and the fight for the end of the world can begin (again).

I am certainly not disappointed with this book and once again, my only feeling of sadness has to do with wondering how long I will have to wait until the final book in the series is released. Oh well, it looks like 2009 is going to be concerned with trying to fill the void left in my life after finishing the Old Kingdom (Garth Nix) and existing Power of Five books.