It's looking more and more unlikely that the sequel to Golden Compass is going to be made. This really breaks my heart. I don't think I have ever been more keen to see a book brought to life. I didn't enjoy Golden Compass at all (which is the film version of Philip Pullman's book Northern Lights, which seems to have been permanently renamed to Golden Compass by the publisher). When I saw Golden Compass, my immediate impression both during and after the film was that there was a really great story here and that the producers were really screwing it up. If you look at bridgeofthestars.net you'll see more than one person agrees with me and that includes people who knew the books beforehand. Many people believe that we should just scrap the New Line cinema version of the story and start again. Preferably with a new film correctly named "Northern Lights".

Back to my heart breaking though. I am really sad to think that I might never see The Subtle Knife or The Amber Spyglass on the big screen now. The whole way through the books I tried to imagine who they would get to play Will and Mary. Mostly, though, I am positively dying to see how they envisioned Cittagazze, The World of the Dead and the world Mary finds herself in. (Does it have a name? I can't remember). Lastly, of course, I wanted to see how the angels, mulefa, Gallivespians and the harpies were represented. I was quite excited to see that on one of the alternate covers to The Subtle Knife the picture was almost identical to how I had myself imagined Cittagazze. 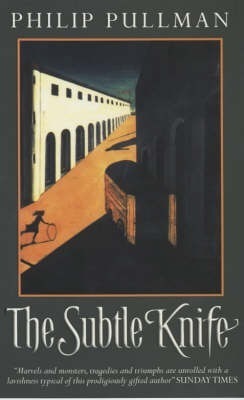 To be perfectly honest, I think the best thing that can happen here is that the BBC gets hold of the story and makes it into a series.