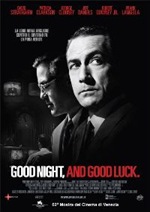 Not everyone could have won the Oscar that year (2006) and indeed, I have already stated that Philip Seymour Hoffman deserved it. The point is that David Strathairn was absolutely brilliant as Edward R. Murrow and I would have liked to have seen this recognised more in the 2006 rewards circuit. His performance was almost musical, as beautiful as hearing a solo violin. I imagine this sense was enhanced by the black and white format.