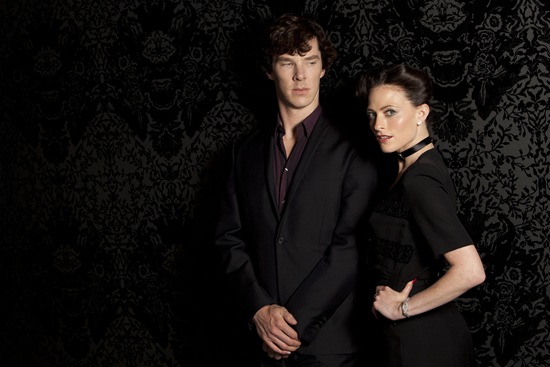 The BBC’s Sherlock has finally returned to our television screens for a second series.  The series will consist of three 90-minute episodes to be shown over the next three weeks.  “A Scandal in Belgravia” is a modern take on on Arthur Conan Doyle’s short story “A Scandal in Bohemia” which was the first of his short stories to appear in The Strand Magazine.

A case of blackmail threatens to topple the monarchy itself, but soon Sherlock and John discover there is even more to it than that. They find themselves battling international terrorism, rogue CIA agents, and a secret conspiracy involving the British government.

But this case will cast a longer shadow on their lives than they could ever imagine, as the great detective begins a long duel of wits with an antagonist as cold and ruthless and brilliant as himself: Irene Adler.

“A Scandal in Belgravia” begins where “The Great Game”, the final episode of the previous season ended.  Holmes and Watson are in the midst of a deliciously wicked showdown with the deranged “consultant criminal” Jim Moriarty (Andrew Scott) when Moriarty receives a phone call that postpones an almost certainly explosive situation.  A couple of seconds of hilarity follow when Moriarty apologises for taking the call:

Moriarty’s reaction to the news that he hears is chilling, supremely disturbing but Holmes and Watson live to see another day.  I think I might like this particular portrayal of the arch villain Moriarty.

After a series of  cases that allude to the classic Arthur Conan Doyle tales (The Geek Interpreter and The Speckled Blonde), we finally land upon a case in which the great Sherlock Holmes is baffled.  Shortly after that, Holmes is disturbed in the middle of a case involving a backfiring car exhaust as he and Watson are summoned to Buckingham Palace, of all places.

Irreverent as always, Holmes refuses to get dressed, causing his brother Mycroft to despair.

Mycroft Holmes: "We are in Buckingham Palace, the very heart of the British nation - Sherlock Holmes, put your trousers on."

It seems that Irene Adler has obtained a series of compromising photographs of her and a certain royal lady.  Naturally, Holmes is not interested in the case until something about Adler and her search for power intrigues him. 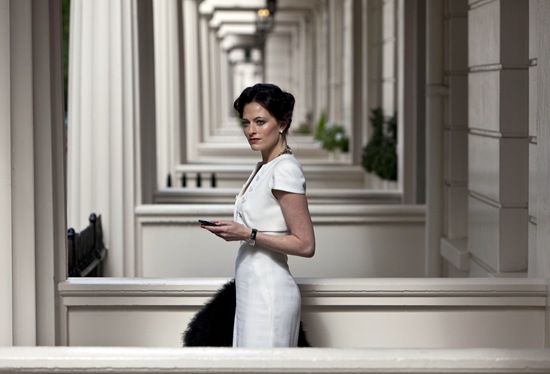 There is so much to like about this episode.  I am not a fan of Irene Pulver, having detested her turn as Isabella in Robin Hood and not quite liking Erin Watts in Spooks.  In Sherlock, I thought she was cast perfectly and I really enjoyed her portrayal as “The Woman”, she who confounds Sherlock Holmes.

As always, I enjoyed the wit and humour of the script, loved the idea that John Watson maintains a blog and was thrilled to see the inclusion of Holmes’s famous hat.  I was especially impressed by the beautiful score and am pleased to see that the BBC Sherlock Original Television Soundtrack will be released at the end of January.  If the soundtrack includes the moving and haunting refrain that played throughout this episode, I will certainly be buying it.

There was quite a storm across the Internet and on Twitter about the perceived sexism in this episode and the portrayal of Irene Adler.  While I hold no illusions regarding Steven Moffat’s deep-seated hatred of women, I somewhat disagree with the notion that she is reduced to a damsel in distress in this episode.

Firstly, let us not forget that it is Adler herself who “saves” Holmes and Watson in the opening scenes of the episode and Watson spends much of his life cleaning up after Holmes.  In fact, if anyone requires saving in “A Scandal in Belgravia”, it is Sherlock Holmes himself.

Holmes has built his entire identity on his ability to read people and to reach the bottom of any conundrum through his impressive powers of deduction and observation.  When he fails in this and ultimately loses Irene due to his failure, he is plunged into a state of crisis and his very sense of self is challenged. 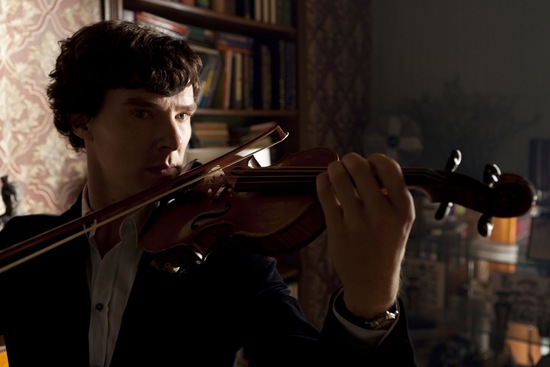 It is more than that though.  Sherlock’s addictive personality is alluded to throughout the episode and John Watson knows exactly where Sherlock is headed when he enquires about his smoking.  Sherlock plunges into several months of violin-playing obsession and self-reflection, as evidenced by the gap in cases on John Watson's blog.

Indeed, Sherlock himself is not able to pull himself out of his funk.  Months down the line, it is only the fact that Irene is alive and well that spurs him in to action again.  Perhaps there is just something in this portrayal of Holmes on an emotional, self-destructive spiral that resonates with me, the knowledge that as an addict, he could very well let his entire business fail while he sinks. Given his state of mind, there was no possibility of the men rushing in and saving the day, in my humble opinion.

I think the proof is in the final scenes.  The look on Irene Adler’s face was not one of “oh, thank goodness, my knight in shining armour, you have saved me!”.  Instead, it was simply an acknowledgement, a hint of “you got my messages”.  It seemed that everything happened exactly as Irene had planned and that her pursuit of the game had been fulfilled. 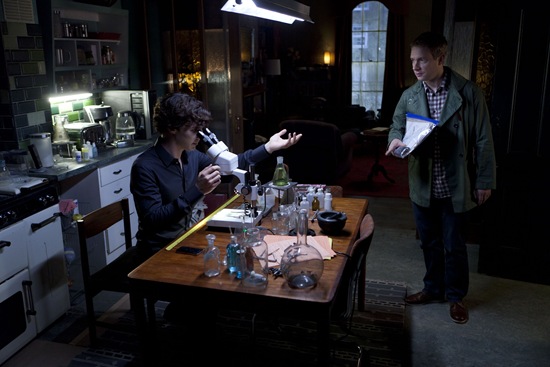 There were, of course, parts of “A Scandal in Belgravia” that I did not like and most of them had to do with the final 15 minutes of the episode.

I knew that Irene was working with Moriarty, I thought it was obvious from the opening scenes.  What I didn’t like was the idea that Irene was working with Mycroft (which I deduced from her appearance on the plane) as this seemed like an unforgiveable betrayal to me.  Then again, she did put Mycroft in his place after the plane scene, so perhaps I deduced incorrectly?  I also didn’t like the idea of the “plane of the dead”, the notion that blowing up the dead was morally okay, seeing as it saved innocent lives.  But perhaps that was the point?  Sherlock completely scuppered those plans.

All told, I loved this episode and I can hardly wait until next Sunday’s episode, “The Hounds of Baskerville”.  This one is written by Mark Gatiss, so perhaps we can expect greater things?

Promo photos for BBC’s Sherlock – “A Scandal in Belgravia” 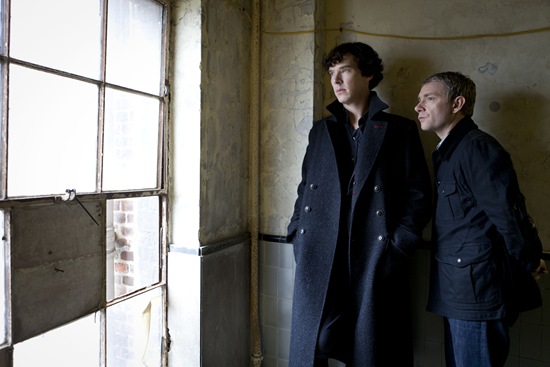 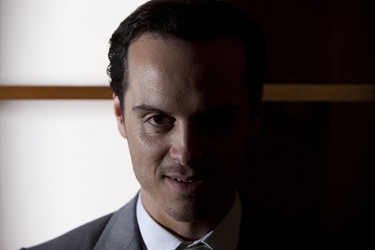 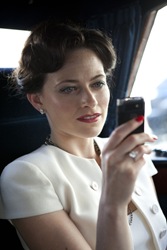 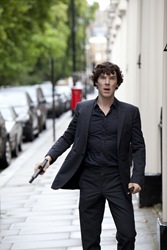 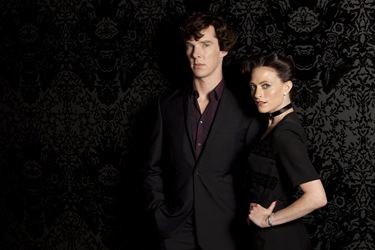 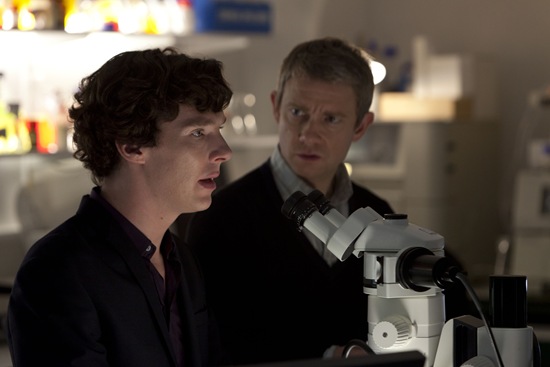 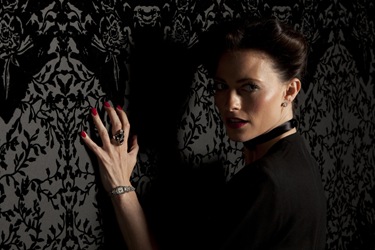 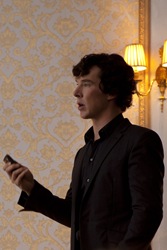