Joseph Gordon-Levitt is on a Premium Rush 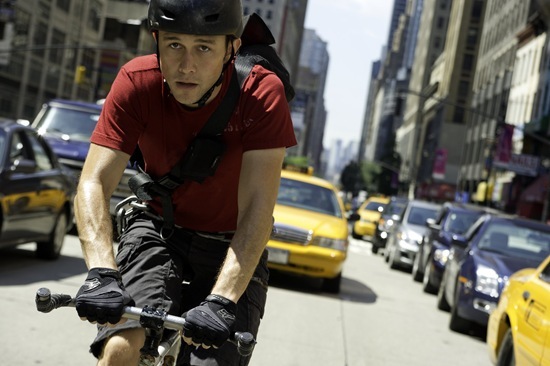 Joseph Gordon-Levitt has come a long way since playing the adorable Tommy Solomon on 3rd Rock from the Sun.  In just a couple of years he has become one of Hollywood’s hottest assets with starring roles in 500 Days of Summer and Inception.  The good news is that Joseph will be returning to our screens  in early 2012 with Premium Rush.

Directed and written by David Koepp, Premium Rush is set in Manhattan in the suicidal and adrenaline-crazed world of bicycle messengers.  These are the lunatics that ride the fixie bikes, super lightweight, single gear bikes with no brakes that are perfect for weaving in and out of traffic.  When Wilee (Joseph Gordon-Levitt) picks up a premium rush as his last job of the day, he expects the usual speeding cars, crazed New York City cab drivers and cranky pedestrians but he certainly does not expect it to become a life or death chase.  Unluckily for Wilee, this package is different and he somehow manages to attract the attention of a dirty cop (Michael Shannon, Boardwalk Empire) who pursues him through the city.

Premium Rush looks like a solid thriller full of action and heart stopping suspense.  From the trailer, it looks like he fights back too and tries to negotiate with his pursuer.  Besides, I can think of no better reason to go to the cinema than 90 minutes of Joseph Gordon-Levitt looking fit and athletic on a fixie bike.

Premium Rush is due out January 13th in the USA and February 3rd in the UK.

Article first published as Joseph Gordon-Levitt is on a Premium Rush on Blogcritics.