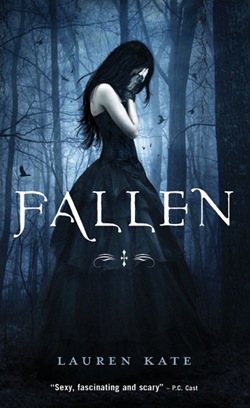 Some lessons have to be learned the hard way, lessons such as “don’t ever fall in love with a fallen angel” and “never, ever judge a book by its cover”.  I made that mistake recently.  I noticed the hype brewing up around Lauren Kate’s Fallen, I fell in love with the cover of the book, and I bought it without so much as reading the back cover.  I feel I should mention that I had a fair idea of what I thought I was getting myself into.  I recently had to read quite a heavy tome in the course of my studies and I was looking for a light, romantic fantasy like The Twilight Saga or House of Night series.

Of course, you can guess where this is leading: I was sorely disappointed.  Let’s start with what the book got right.  Books set in boarding schools are as popular as ever and we’re often treated to perfect, sleek and shiny campuses such as Hogwarts, St. Vladimir's Academy, and the House of Night.  What I liked about the Sword & Cross reform school was its rust, weeds, cemetery and general state of disrepair.  It was fitting that a school for misfits should be as dysfunctional as the students themselves.

I liked that the various characters were described and introduced in such a way that I was able to easily remember who they were without having to flip back and forwards through the book.

What I really didn’t like about this book was that the fantasy portion of the book was so undeveloped that it might as well have been absent.  Apart from telling us that the book is about angels, the mythology and canon of angels, demons and watchers was not tackled whatsoever.  In fact, if every reference to Daniel being an angel was replaced by him being a cardboard cut-out of a boy, and every mention of Luce’s strange shadows was replaced by mention of her valuable stamp collection, I honestly believe it would have added as much to the story as the supposed presence of angels and demons did.

So, in Fallen, protagonist Lucinda Price arrives at the Sword & Cross reform school in Georgia following a terrifying incident where her shadows appear to kill a boy.  She meets two boys named Cam and Daniel.  Because readers of romantic fiction are a bit dim, Cam is helpfully described as being dark haired and green eyed (evil) and Daniel has blonde hair that cascades around his face like a halo, framing his blue eyes perfectly (good).

Cam is charming, handsome and definitely interested in Luce so that is obviously a slight turn-off for her.  Daniel is rude, arrogant and flips Luce the bird the first time she sees him so she finds herself strangely attracted to him.  Of course.

I’m being slightly unfair at this point, I know.  I struggled to get into the story at first because it is quite descriptive in the opening chapters and not a lot happens.  It turns out that that level of description does aid the atmosphere and character development mentioned above, so ultimately that is a good thing.  I found the middle of the book to be quite enjoyable and I could see how Daniel’s hot and cold treatment of Luce have both attracted her and challenged her to find out more about him.

What fails Fallen the most is the closing chapters and lack of depth.  The story gets quite chilling and frightening in the middle of the book with a fire at the school in which one of Luce’s classmates perishes.  However, as the story progressed, I couldn’t shake the feeling that this book was actually quite terrible.  It felt as if the author was saying that Daniel is a fallen angel, now go look that up on Wikipedia.  There is no mention whatsoever of the mythology and story behind that.
I spent a lot of time whining about the Twilight Saga but even that includes a pretty strong narrative about vampires, werewolves, Volturi and immortal children.  A lot of time is spent exploring the vampires’ lives before joining the family of Carlisle Cullen, including the events leading up to their deaths.  There is very little of that in Fallen and in the end,when you find out that Luce and Daniel have repeated this cycle for millennia, the natural reaction is so what?

Many books stumble over attempts to set the scene when they are the first in a series.  This is not one of them.  After finishing this book and reading both the first chapter of the next book and summaries on Wikipedia, I realise that answers are still not provided by the end of the third novel which makes this a very shallow, weak series.  I can say quite happily that I will certainly not be continuing with this series and I am sorry I bought the book.
For a couple of entertaining chapters in the middle, I give this book 1 out of 5 stars.

If you really insist on buying Fallen, you can do so at Amazon.co.uk

Otherwise, leave a comment and I might be inclined to send you my copy if I haven’t used it for fire wood by then.