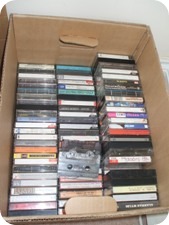 I feel like I just bumped into my first boyfriend after twenty-four years and realised I am still in love with him.  I was doing a bit of spring late summer cleaning and came across a random box of cassette tapes.  Now I have moved house 7 times in the past ten years and one of those moves was to another continent so the chances of me finding a random box of anything is pretty slim as we were really liberal with throwing stuff away over the years.  Yet there it was, this magical box.

I don’t know how long it is since I’ve listened to a cassette tape.  I can quite confidently say that it has been at least fifteen years, if not twenty.  The only cassette tapes remaining in this box were those that I hadn’t already splashed out on CDs for and I know that I wanted to keep them until I had a chance to sort through them.

I rarely bought albums on cassette.  I used to buy the LPs and then record them onto a cassette so that the LP quality could remain intact and not get scratched from repeated listening.  It was a rather useless and pedantic habit that I learned from my parents and one that certainly didn’t stand the test of time.  My LP’s have been in a sealed box for at least twenty years now and I am quite certain that they will have warped and been damaged from our constant moves.

I also used to record songs from the radio on to cassette tapes.  Many a Saturday afternoon was spent waiting by my tape recorder waiting for that song to come on the radio so that I could record it.  Those were the real “mix tapes”  and certainly the hardest to replace over the years.  There are certain albums which you’d inevitably replace, such as Pink Floyd’s Dark Side of the Moon or U2’s Joshua Tree but what about that single song that you were crazy about in 1987?  I was crazy about “Ship of Fools” by World Party, for example, but not crazy enough to splash out on the entire album.  All I can say is thank goodness for the digital age and the ability to buy single mp3s from Amazon.com. 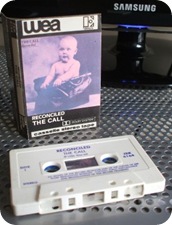 The first cassette that I pulled out of the box today was The Call’s 1986 album Reconciled.  I was quite surprised to see it as this was a massive favourite of mine, oh, twenty-four years ago and I hadn’t thought about it for years.  Not many people know about this band but you might recognise the song “I Still Believe” from The Lost Boys soundtrack.  I wasn’t exaggerating in my opening paragraph of this post.  It is like the years haven’t made one bit of difference and I am as much in love with this album as I have ever been.  It is amazing to hear it again.

Of course, I spent the rest of the afternoon going through the tapes and spent a small fortune on old new music.  Quite frankly, you’d think I would have noticed before now that my music collection was missing Hothouse Flowers’ Home and several Waterboys and Dire Straits albums.  How I survived without the soundtracks to The Piano and The Doors I will never know and not having the 1989 Texas album Southside was just madness.  Now that equilibrium has been restored in my music collection and my iPod is completely full, I’m going to sit back and propose a toast to the digital age.

I know it is not cool or trendy to admit that I prefer digital music over LP quality but I am thankful every day that I don’t have to muck about with cassette tapes and record players any more.  I can get any song I want and I don’t have to pay exorbitant prices for full albums or countless remixes of a song that I neither want nor like.  It was lovely meeting up with my old cassettes today and wonderful listening to a much-loved and almost forgotten album but I am more than happy to carry the tunes with me into the future while leaving behind the hassle.