Book: When We Were Orphans - Kazuo Ishiguro

Towards the end of 2009, I found that I was bouncing between Young Adult and Urban Fantasy novels and was beginning to bore even myself. I often take recommendations from other readers and my “to-read” list at Goodreads.com is ridiculously long.  So I’ve made a resolution of sorts to start reading good, classic fiction in amongst all of the vampires and demons and teenage witches and spies.

Would you believe that I hadn’t heard of Kazuo Ishiguro before?  I saw the film Remains of the Day but hadn’t realised it was based on a book.  I went into the library looking for Never Let Me Go by Ishiguro which was on the Goodreads list Best Books of the Decade: 2000's and landing up taking this one out as there were no other Ishiguro books. 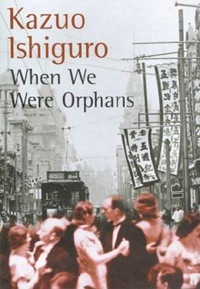 It is England in the 1930s and Christopher Banks is a hugely successful detective.  He narrates his story which tells of his rise as a detective in the early 30s but also touches on his childhood in Shanghai and the disappearance of his parents.  Despite all of his success in life, he has never come to any real understanding of how his parents disappeared and why it wasn’t properly followed up by authorities.

His observations of the world around him as an adult are crisp, clear and accurate yet his memories of his childhood are touched with an innocence and naivety.  It is clear that he does not have the benefit that maturity and hindsight offers to most of us when we remember our childhoods as he was wrenched out of Shanghai and transplanted in England when his parents disappeared.  His memories of his childhood remain untouched too by his discoveries as he unearths evidence regarding his parent’s disappearance.

When We Were Orphans gives a wonderful insight into life in 1930s England and the triviality and shallowness of high society.  It is a complex book at times dealing with the many issues present in the British Settlement in Shanghai and the roll of the British in the opium trade.

I found it overall to be an uplifting and amusing book and I think Ishiguro rather drily passes commentary on how sentimentality can mislead us sometimes, much in the same way Gatsby’s view of the present was tainted by his sentimental memories of the past.

I really enjoyed the book and will certainly read more from Ishiguro.  I’d quite like to see a film made of this book too; I imagine it would be similar to Empire of the Sun.  I give the book four out of five stars.