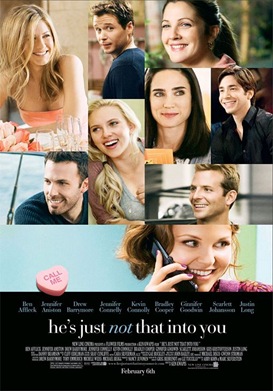 With our brand new Cineworld Unlimited cards in hand, Stephen and I went off to the cinema for an early Saturday morning Valentine's date. If you are wondering why we would choose a Saturday morning rather than a Saturday evening to go to movies, then you obviously haven't sat in a movie theatre in England lately. In South Africa (and every other country I have been to the cinema), people sit still during a movie, they mostly keep quiet and they generally behave and are considerate. In England... they don't. Having picked up that English people don't like to get up too early on weekend mornings, we have found the most peace and quiet by going to the first show in the morning. Otherwise, it is like trying to watch a film in the middle of a busy market with people walking up and down all the time and having complete conversations out loud.

He's Just Not That Into You is a delightful film with a large ensemble cast and a cleverly written storyline. We really enjoyed the film and it was the perfect light-hearted film for a Valentine's date. I liked that despite having some big name actors in the cast, it was the lesser known actors that steal the show.

The basic premise of the film is obvious from the title: women are always wondering about the significance of men not calling or treating them like rubbish, when in reality men just don't care. Or so the story goes. The film made a decent attempt at trying to portray the reality behind dating and the harmful lies we tell to each other when we're just trying to bolster someone's confidence.

At the end of the film, some of the storyline weren't predictable at all which was great because it wasn't happy endings all round. Small parts of the film were predictable of course but the net effect was entertainment and the feel-good effect which is fantastic.

For a well-written script, large and interesting cast, entertainment and feeling happy afterwards, I give the film an 8 out of 10. Points deducted because we can't all be Oscar winning Slumdog Millionaire material.